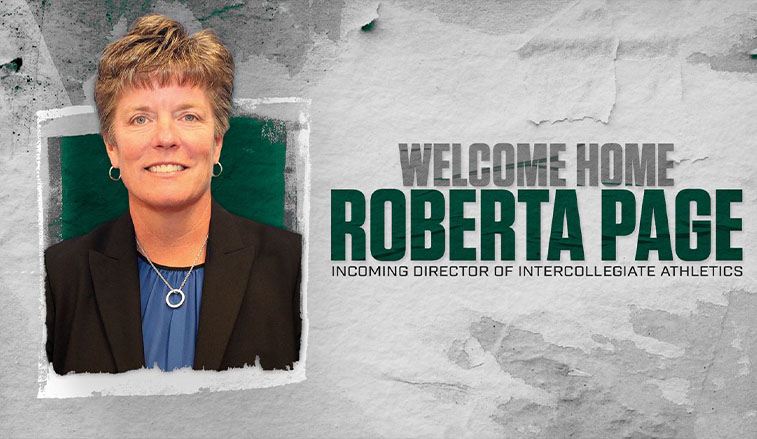 SLIPPERY ROCK, Pa. — Slippery Rock University has announced the hiring of 1988 SRU alumna and 2015 Rock Athletics Hall of Fame inductee Roberta Page as its next director of intercollegiate athletics.

Page, who has served as the director of championships and alliances at the NCAA since 2009, will become the 12th athletic director in SRU history and the first female to serve in the role on a full-time basis. She replaces the longest tenured athletic director in program history, Paul Lueken, who retired in January after more than 26 years in the role.

"I am beyond excited to be returning to my alma mater," said Page. "I want to thank President Behre and David Wilmes (SRU's chief student affairs officer) for trusting me to carry on the proud traditions of Slippery Rock Athletics. Having the chance to come home and work with the amazing coaches, staff and student-athletes is something I am truly looking forward to. As an alum, I am looking forward to reconnecting with alumni and the amazing professors who pave the way for our success."

This will mark the second Division II athletic director appointment for Page, who also served as the AD at fellow Pennsylvania State Athletic Conference institution Shippensburg University from 2003-09. At SU, Page led a department that included 20 intercollegiate sports and more than 500 student-athletes. She also served as the Title IX coordinator, was responsible for compliance and worked with the Shippensburg University Foundation to fundraise and expand athletic scholarships.

Page began her path to a career in collegiate athletics as a two-sport athlete at SRU. The Greensburg native played four seasons of softball (1985-88) and one season of basketball (1986-87) at The Rock. She finished her career batting .266 and still ranks fifth at SRU in single-season triples after she hit three in 1988.

After working in high school education and athletics early in her career, Page made the move to collegiate athletics in 2000 when she accepted an associate athletic director and senior woman administrator position at Shippensburg University. She was elevated to the interim AD position in December 2001 and had the interim tag removed in June 2003.

During her tenure at SU, the Raiders won the PSAC's Dixon Trophy as the top overall athletic department three times (2003-05), while also finishing as runner-up in the standings twice (2006, 2009) and never finishing lower than sixth in the final standings. SU claimed 14 PSAC titles, had 60 All-Americans and crowned two individual national champions during Page's time there.

After six years leading the Raiders' athletic department, Page accepted an opportunity to impact even more student-athletes - on a much broader scale - when she was named the director of championships for the NCAA in 2009.

Page is intricately involved in the day-to-day operations of the Division II field hockey, women's basketball and women's tennis championships, serving as the championship manager for planning and execution of those events. Her role leading the field hockey championship crossed over with SRU in 2018 when The Rock hosted the Division II Fall Festival and served as host of the Field Hockey National Championship in Pittsburgh.

In addition to her daily responsibilities at the NCAA, Page is also a member of the Women Leaders in College Sports organization, which was formerly known as a merger of the National Association of Collegiate Women Athletics Administrators and the Higher Education Resources Services organizations. She is also a member of the SRU Alumni Association and volunteers with the Make-A-Wish Foundation and Relay for Life.

While Page will become the first woman to ever assume the director of athletics position at SRU on a permanent basis, she will be the third woman to lead the department in an official capacity. Cheryl Levick served as an interim AD in fall 1982 and Joanne Leight is currently serving as the interim AD this spring.

Page will continue in her role at the NCAA through the spring 2021 championships before beginning her tenure at SRU in July.