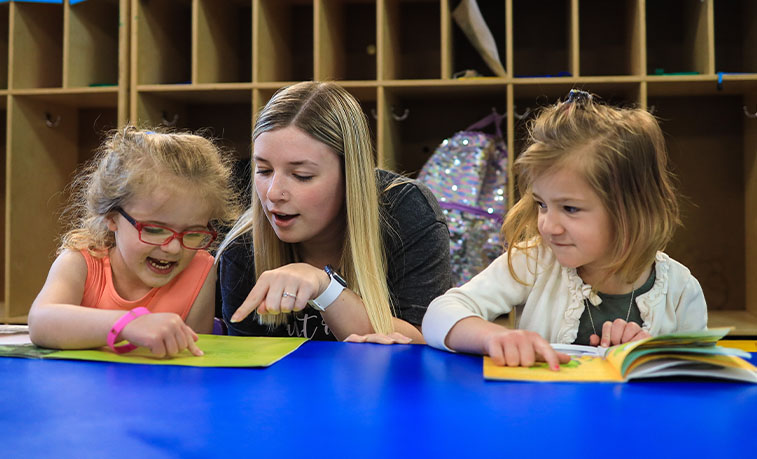 SLIPPERY ROCK, Pa. — Pre-kindergarten programs such as preschool, child care and Head Start are critical to a child's development. Michelle Amodei, a Slippery Rock University associate professor of elementary education and early childhood, has been studying this aspect of early childhood development for years. And when administrators at Grove City Area School District approached Amodei with concerns of lack of participation in pre-K programs by their students, she offered to take up a research project with the help of one of her students who graduated from Grove City Area.

"Having a quality pre-K experience can really prepare a child to start the K-12 system," Amodei said. "It gives them a one-up, particularly socially by being able to engage in a classroom and interact with the teacher and be better around peers. It helps with academics too, but really the social aspect is most important at that age."

Jeffrey Finch, superintendent at GCASD, discussed the issue with Amodei, who lives in the district and is the parent of current and former students in the district. Based on data collected upon kindergarten registration from the past several years, Finch indicated that a majority of GCASD students were not enrolled in a pre-K program before entering the K-12 system, which is not unlike many school districts.

Amodei suggested they survey the parents of children in the lower grades to get to the root of the problem. She recruited Sydney Wise, a sophomore early childhood education major from Grove City, as a research assistant. Wise, who works in the SRU/Student Government Association Preschool and Child Care Center on campus, was a perfect fit.

"I see firsthand every day how beneficial preschool is and all the impacts that it has on children," Wise said. "I've obviously written research papers for classes, but I never had the opportunity to do something this big and with the community, so it was a great opportunity. This allowed me to build personal and professional connections, both with my professor and with principals and administrators."

A total of 75 parents responded to the SRU researchers' survey, and although the sampling wasn't representative of the majority who didn't have children who attended pre-K programs (respondents were about 20%), they had enough participants to identify reasons why families were not accessing pre-K.

"The biggest barrier to preschool access is that programs in the Grove City community simply do not have enough openings; there are not enough of them and the capacity for pre-K age children is too small," Wise said. "The quality of programs, cost and lack of transportation were also barriers."

"(Lack of transportation) is also linked to the hours that pre-K was being offered," Amodei said. "Some of the programs are just two and a half hours, or two or three days a week. For working families, that's not feasible, unless they have grandparents or someone local who can help get them to and from (the preschool). They need a full-time program and they're often waitlisted for these programs or they are too expensive."

Amodei acknowledged that about 40% of children in the GCASD qualify for free or reduced lunches, an indicator of the poverty levels in the district. The cost of preschool programs in the region can range anywhere from $1,000 to $10,000 per year, depending on the quality, hours and other variables such as location and whether the programs are offered by a nonprofit organization, such as a church, or a for-profit company, such as KinderCare. Amodei also said that school districts have offered pre-K programs through Pennsylvania Pre-K Counts grants, but even with state funding there are challenges.

"The problem is most K-12 districts, they aren't really educated in pre-K because early childhood education is different from elementary education," Amodei said. "The considerations that you have for children who are under the age of five are different in terms of how you develop curriculum and how you interact with them and what your expectations should be. It's a struggle, but some school districts have done it really well, and some really struggle with that. We haven't quite found a great answer yet."

GCASD's approach is to partner with pre-K providers, as well as other organizations such as colleges and universities and health care providers, to offer pediatric care and other services.

"We could try do it ourselves, but we're stronger if we do it together," Finch said.

The district recently leased a former primary school building next to the local YMCA, which operates a pre-K program, and they will begin to expand the space for other health service providers such as Allegheny Health Network.

"(Pre-K) providers said they didn't have enough space to expand their programs, but the other problem is they don't have enough qualified staff," Finch said. "We reallocated a building to support the need for space, but we're turning to the colleges for the pipeline of certified people to work in these places. We're partnering with (SRU through Amodei) to not only help us with data to get kids into programs, but also to integrate the teaching program so that (SRU) students can use it as research and practice lab."

The SRU researchers are hopeful that their research can be used by school administrators, not just at GCASD, to make decisions regarding pre-K access. Amodei and Wise presented their research earlier this year at the Eastern Educational Research Association Conference in Clearwater Beach, Florida, for which Wise compiled materials and helped lead a roundtable discussion. Wise also conducted a recorded poster presentation at the SRU Symposium for Student Research, Scholarship, and Creative Activity.

"I love being with kids, but for this project I got to jump in and do a lot of things I was scared to do, such as public speaking, making a lot of phone calls and presenting at conferences," Wise said. "But the biggest surprise for me from doing this research is how many people don't send their children to preschool, not just in (Grove City) but all over the place. Sometimes people don't think preschool is that important because it's not usually part of the school district programming. But it is so important for kids because that's where they first learn their basic literacy, numeracy, and fine-motor and gross-motor skills. Everything is built upon those basics skills that they learn in preschool."