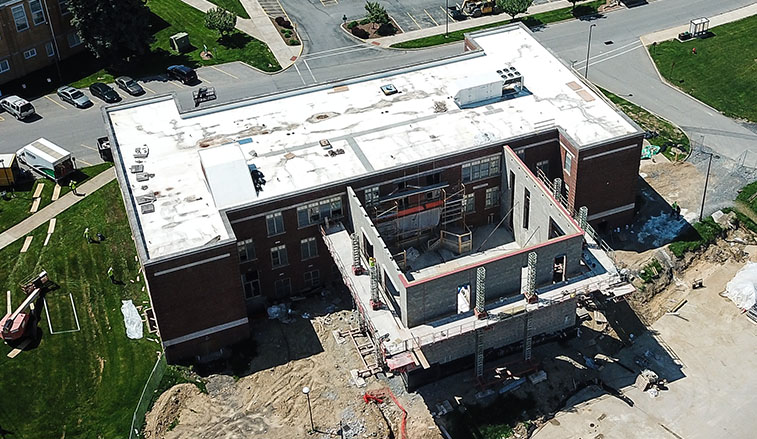 Included among the 20 major constructions projects at Slippery Rock University this summer is the $6.5 million renovation to the Strain Safety Management Building, which will be completed by the start of the fall 2018 semester.

SLIPPERY ROCK, Pa. - Summertime is always prime time for construction and campus improvement projects at Slippery Rock University. While the timing of the projects this summer is not as aggressive as previous summers, there still will be plenty of work to be done before fall classes begin Aug. 27.

"This will be a busy summer but not an overwhelming summer," said Scott Albert, assistant vice president of facilities, planning and environmental safety. "The timing has worked this year where we will have three decent-size projects that will finish up around the same time."

That trio, improvements to Strain Safety Management Building, North Hall and ROCK Apartments, accounts for a combined $13 million. In all, Albert said, there are more than 20 major projects on the docket totaling a combined $66.5 million that will be in various phases on the construction spectrum.

The North Hall and ROCK Apartments residence facilities will be renovated in two phases, the first of which will be completed before the start of the fall semester with the second phase on tap for summer 2019.

Improvements to North Hall this summer will include new bathrooms on each of the three floors and various cosmetic improvements to the third floor. Similar updates for the second floor and new windows for the entire building will be part of the second phase.

The kitchens and bathrooms in four of the eight ROCK Apartment buildings - 310, 320, 330 and 350 - will be renovated this summer with the other four buildings scheduled for upgrades in 2019. The ROCK Apartments house a combined 188 students in 47 four-bedroom units.

Renovations to the performing arts buildings also kick off this summer. Projected completion dates for the various buildings include: West Gym by January 2019, East Gym by May/June 2019 and Miller Auditorium by August/September 2019. Upon completion, Miller Auditorium will be expanded by 9,500 square feet and feature a 753-seat performance space, two dance studios, an orchestra pit, a new lobby and a scene shop. West Gym will house offices and classrooms for SRU's Dance and Theatre Departments and a dance studio with additional support areas for both departments. East Gym updates will include a black box theater with seating for 296, a costume shop, acting and design classrooms and a dance studio.

Other summer projects include renovations to the softball field, the replacement of underground steam and condensate lines near Boozel Dining Hall and Buildings A through E, adjusting the cross slope of Field House Road near the Morrow Field House entrance and routine asphalt maintenance and seal coating to several parking lots.