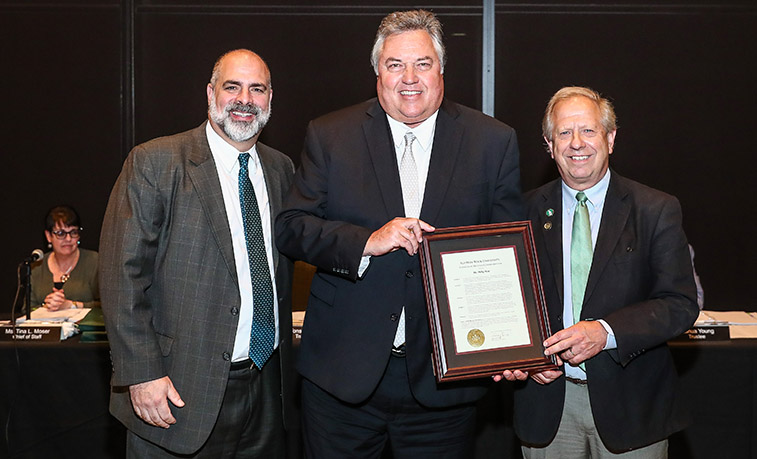 From left, Slippery Rock University President William Behre, Provost and Vice President for Academic and Student Affairs Philip Way and Jeff Smith, chair of the council of trustees, celebrate Way’s accomplishments at SRU following the presentation of a commendation. Way will become president of Athens State University in Alabama, Aug. 1.

Showalter developed Fire Fighter Sales and Service Company into an industry-leading provider and designer of fire protection service and prevention, life safety and first-aid equipment and consultation. The company has for many years served as a supporter of the University's safety management program, having, at its own cost, provided state-of-the-art emergency response and fire training laboratories; and product and systems training for student use.

Cavill, a retired SRU emeritus assistant professor of safety management, died May 15 at the age of 88. A native of New Castle, Cavill had a nearly 60-year affiliation with SRU as a student, student-athlete, gymnastics coach and faulty member. Upon her retirement in December 2015, the University awarded Cavill an Honorary Doctor of Public Service. At the time of her retirement, she was the longest serving faculty member in Pennsylvania's State System of Higher Education. Cavill established a scholarship to support safety management majors.

McFeely, a junior majoring in safety management at SRU, died in 2005 as the result of an automobile accident. He was a member of the Pennsylvania National Guard and was an officer of SRU's chapter of the American Society of Safety Engineers. Following his death, the McFeely family established the Kyle S. McFeely Memorial Scholarship that is available to safety management majors at SRU during their senior year.

The council also recognized Philip Way, SRU provost and vice president of academic and student affairs, who recently accepted the presidency at Athens State University in Athens, Alabama. Way will begin his duties as that university's 37th president Aug. 1.

The board of governors of Pennsylvania's State System of Higher Education appointed Way to serve as the University's interim president effective July 21, 2017, following the retirement of Cheryl Norton, who had served as president since June 2012. Way served in that role until July 1, 2018 when William Behre took office as the University's 17th president.

Council commended Way for his service to "the people of the commonwealth, Slippery Rock University and most importantly, the students we serve."

Trustees also passed a resolution to demolish the Gail Rose Lodge. The lodge, previously used as a venue for viewing sporting events at SRU's Mihalik-Thompson Stadium, was found to have several structural issues that rendered the venue unusable. The resolution will go to Pennsylvania's State System of Higher Education board of governors for approval and if passed there, on to the Department of General Services for approval. No timetable for the demolition has been announced.

Trustees also officially welcomed Dylan Colcombe, a senior health and physical education major from North Huntingdon, to his seat on the council. Colcombe was appointed to the council by Gov. Tom Wolf. His selection was based on the recommendation of Daniel Greenstein, chancellor of Pennsylvania's State System of Higher Education and Behre following a campus-wide application and interview process. His term continues until he graduates.

Colcombe is a member of SRU's track and field team, earning Academic All-American, All-Region and All-Conference honors; is a color-guard and platoon leader with SRU's Army ROTC program; and a recipient of the ROTC's Advance Designee and SRU's Achievement Award scholarships.

Through standing committee reports, the trustees received presentations from David Jacobson of CliftonLarsonAllen regarding the University's audit plan and from Rebecca D'Imperio from Sightlines regarding the institution's facility asset management status; received a report from Amir Mohammadi, interim vice president for advancement, regarding the search for a vice president of university advancement; heard from Behre about a senior gift program; received an overview of advancement and foundation operations; reviewed the facilities and planning project list and finalized dates for 2019-20 trustee meetings.

The council also elected officers for the 2019-20 academic year, including Jeff Smith as chair; Joshua Young as vice chair and Colcombe as secretary.

In other action, they approved compliance contracts, fixed assets and services and supply purchase orders.