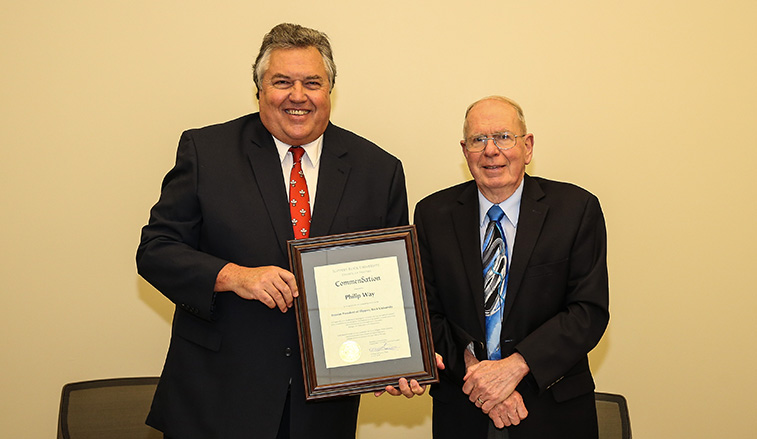 Slippery Rock University Interim President Philip Way is presented with a commendation from the council of trustees for his service to the University.

Way was appointed interim president July 21, 2017 by Pennsylvania's State System of Higher Education board of governors, assuming the duties of interim president following the retirement of Cheryl Norton, who had served as SRU's president since June 2012.

William McCarrier, chair of the council, presented Way a COT Commendation in recognition of his outstanding service and his leadership in keeping the University moving "onward and forward."

Way told the audience, he was "honored to serve as interim president" and thanked the many people who worked hard each and every day to make the University successful.

Way, who will return to his role as SRU's provost and vice president for academic and student affairs, will turn over the president's office to William Behre, provost of Georgian Court University, effective July 1. Behre has nearly 25 years' experience in higher education, including as an educator, researcher, faculty leader and administrator. He has served as Georgian Court's chief academic officer since February 2014.

In other action, the trustees voted to advance four academic programs to Pennsylvania's State System of Higher Education interim chancellor for approval.

Read more about the proposed programs by clicking here.

The trustees also elected officers for the 2018-2019 academic year, those include: Jeff Smith as chair; Alfonso Angelucci as vice chair; and Jairus Moore as secretary. They also approved contracts, fixed assets and service and supply purchase orders and made two bylaw revisions.

Through standing committee reports, the trustees reviewed the audit plan and a Sightlines facility asset management presentation; and received updates on the University's budget and master plan; a status report regarding the Gail Rose Lodge and a proposed President's Pavilion; heard an overview of advancement and foundation operations.; and reviewed the facilities and planning project list.