SLIPPERY ROCK, Pa. - You'll have to forgive Slippery Rock University professor of music and professional saxophonist Jason Kush if he looks a little bewildered should you ask him if he's getting a lot of rest during the University's summer break. Instead of lounging by the pool, Kush, is taking his expertise and instrument on the road to lecture, teach and perform on three different continents: North and South America and Europe.

Kush started his summer adventure June 6 when he traveled to Medellin, Colombia to teach and perform at the Biennial ClariSax Music Festival. There he met and mingled with other musicians from around the world, including Argentina, the Netherlands and France, and conducted two master classes on saxophone for Spanish-speaking student musicians. 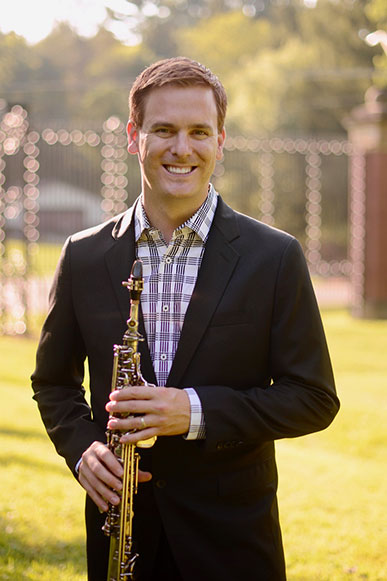 "I speak some Spanish, but I'm not fluent, and the English is not strong (in Colombia]," Kush said. "So, we had to figure out ways to communicate effectively, demonstratively and without spoken language."

That "effective communication" came via a shared understanding of hands-on demonstration and physical instruction. "We made it work," Kush said. "Body language and music are more often than not, very universal."

Kush was one of three American saxophonists in attendance at the three-day festival and the only that specialized in jazz.

Following ClariSax, it is back to North America for Kush where he will perform with the Pittsburgh Jazz Orchestra June 15. The orchestra, of which he's been a member since 2012, will be performing as part of Pittsburgh's Jazz Live Festival. The group will be joined by musician Sean Jones.

"It's kind of a big deal because Sean Jones is one of the greatest jazz trumpet players in the world," said Kush.

Following the date with Jones, Kush will join the Pittsburgh Symphony Orchestra and genre-bending musician Ben Folds for a June 20 concert at Heinz Hall before he and the PSO open a June 21-24 pops series called "Broadway Divas," featuring music from musicals including "Mame," "Dreamgirls" and "Wicked."

During his time stateside, Kush also will lead the annual Jazz Academy camp at SRU. The camp gives young musicians the opportunity to learn and experience the jazz world and genre, as well as interact with other students and professional musicians.

Following a few days of rest, Kush then jets off to another foreign locale, Croatia, where he will lecture and perform at the World Saxophone Congress in Zagreb, July 11. Tagging along will be his wife and two young children, who he's excited to introduce and immerse into this experience.

The World Saxophone Congress is staged every three years and is attended by several hundred saxophonists from countries including China, Australia and Russia among others. Kush will perform a piece by Italian composer Salvatore Sciarrino entitled "La bocca, i piedi, il suono (The Mouth, The Feet, The Sound)" with a primary saxophone quartet accompanied by an ensemble of approximately 100 additional saxophonists.

"This piece is something that you need to find the right place and the right audience for, and the World Saxophone Congress is definitely that right place," Kush said.

During the event, Kush will also give a lecture on the aulochrome. An aulochrome is a new woodwind instrument invented by Kush's personal acquaintance, Belgian François Louis, and first prototyped in 1999. It consists of two soprano saxophones that can be played either separately or together. The name comes from Greek aulos and chrome.

"This is a very unique instrument that is like a saxophone but polyphonic, meaning it can play two notes at one time," Kush said. "It's a wind instrument of the future."

While his "summer tour schedule" is a bit rushed, Kush said it's a good opportunity to observe other professionals and professors both in performance and in instruction; providing opportunities for self-learning while listening to the work of some "cool and inspirational" colleagues.

"I've been building my career to makes these types of opportunities and I feel very fortunate that with a busy career and family life, circumstances have allowed me to participate."