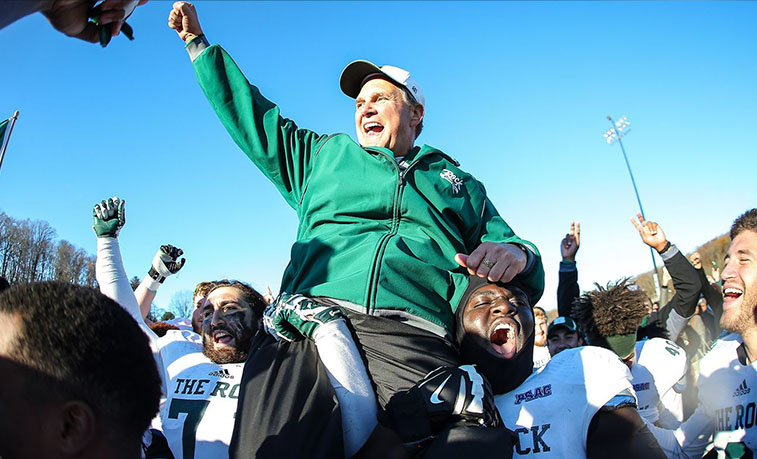 The criteria for a coach to be considered for the College Football Hall of Fame states that they must have been a head coach for at least 10 years, must have coached at least 100 games and must have a career winning percentage of at least .600. Players must be named to at least one credible first-team All-America honor and have finished their collegiate career more than 10 years prior to be nominated.

Mihalik served as head coach at SRU for 28 seasons (1988-2015). He also starred as the starting quarterback at The Rock in the early 1970s and served as an assistant coach before taking over as head coach in 1988. In total, Mihalik was involved with the SRU football program for 44 years.

He came to SRU in 1970 and was a three-year starter at quarterback, leading the squad to back-to-back conference championships in 1972 and 1973 and an overall record of 25-5-1. He became a graduate assistant with the program before being named an assistant coach and eventually head coach in 1988. Mihalik compiled a 197-111-4 record, a .638 career winning percentage, won eight Pennsylvania State Athletic Conference Western Division Championships and reached the NCAA Division II playoffs six times. He was named PSAC Coach of the Year six times and Super Region One Coach of the Year three times.

Mihalik, who had his name added to the football stadium at SRU in 2011, took SRU to six NCAA Division II playoff appearances, reaching the national semifinals and ranking as high as No. 2 in the Division II national rankings.

Equally, if not more impressive, is the fact Mihalik was one of the few coaches in the nation that had a doctorate degree and managed all of his coaching successes while also serving as a professor of safety management. He was integral in developing the curriculum for SRU's safety management program and continued teaching and advising students through his final semester as head coach in fall 2015.

Since retirement, Mihalik has continued to serve the University, currently working with the SRU Foundation, Inc. in various fundraising capacities.

The announcement of the 2021 College Football Hall of Fame class will be made in early 2021. The class will be inducted Dec. 7, 2021 at the annual National Football Foundation Awards Dinner in New York City.