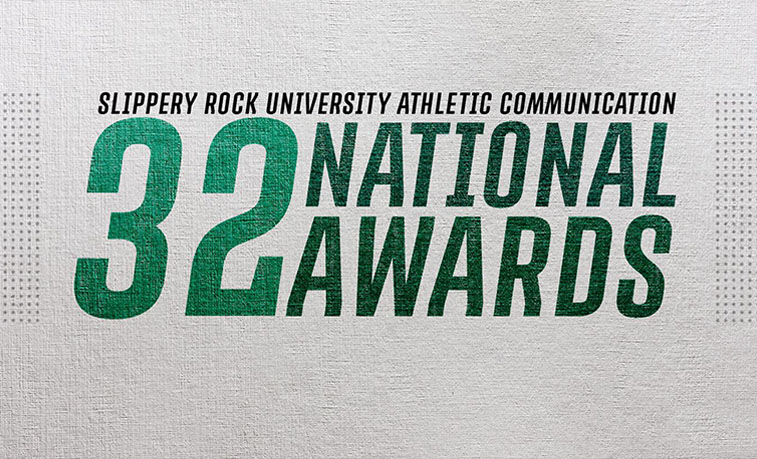 SLIPPERY ROCK, Pa. — Slippery Rock University's Athletic Communication Office captured 18 awards in the 2018-19 CoSIDA Publication and Digital Design Contest, bringing its total number of national awards for the past academic year to 32 in the areas of publications, design and writing. It is the fourth consecutive year that SRU's Athletic Communication Office has led all Division II programs in national awards won.

The 18 awards from CoSIDA were eight more than any other college division school (Division II, Division III, NAIA, JUCO) in the nation and were just one behind Division I West Virginia University of the Big 12 for the most awarded to any institution. Among those 18 were six "Best in the Nation" recognitions for game programs, game notes and digital graphics.

"I'm very proud of the efforts of our staff this year," said Jon Holtz, SRU director of athletic communication. "We work tirelessly throughout the year to promote the University, its student-athletes and coaches. Being recognized for those efforts on a national level, especially by our peers in CoSIDA, is incredibly rewarding. I really want to thank Assistant Director Tyler McIntosh and Ben Matos, our graduate assistant for their outstanding efforts. They, along with our exceptional student workers, continue to elevate SRU to a new heights. I also want to thank the Office of University Communication and Public Affairs, led by Rita Abent, for supporting our office with the tools we need to be successful. These awards are a true reflection of our entire operation."

These honors put the cap on a year in which Holtz represented the Athletic Communication Office and Slippery Rock University in a number of executive leadership roles. He served as president of the Eastern College Athletic Conference Sports Information Directors Association and was a member of the Division II Sports Information Directors Association national board.

SRU's Athletic Communication Office is responsible for all communications regarding SRU athletics, including but not limited to, all content on the official athletics website, www.RockAthletics.com, all game programs, game notes and other preview information and recaps for events, all live video broadcasting on the Rock Athletics Digital Network and all official athletics social media accounts. Since the 2014-15 academic year, the office has been honored with 85 total awards.