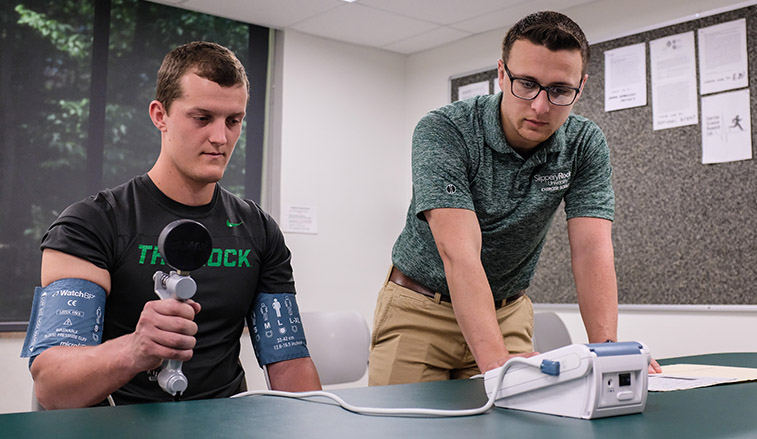 SLIPPERY ROCK, Pa. - Studying inter-arm blood pressure difference is a big project for faculty and student researchers in Slippery Rock University's Exercise Science Department. Now it appears there are curious students from outside that field of study who are helping them get a grip on the research.

"You can really see a spike in blood pressure when you're doing resistance training or isometric exercises," said Lance Neuscheler, a senior exercise science major from Saegertown. "It's a common form of exercise and has been known to have significant effects on resting blood pressure. Our ultimate goal is to investigate some things that people have never looked at before and hopefully we'll find some new information to offer researchers."

Neuscheler is the co-investigator of a study called "The Effects of Isometric Handgrip Exercise and Arterial Occlusion on the Inter-Arm Systolic Blood Pressure Difference." Last semester, Neuscheler and the research team, under the direction of Michael Holmstrup, associate professor of exercise and rehabilitative sciences, tested 32 participants for inter-arm systolic blood pressure difference, or ISBPD, the same way that more than 60 participants were tested by another group last summer. However, instead of having participants run on a treadmill, they squeezed a handgrip dynamometer, which measures isometric strength of the hand and forearm muscles.

The researchers took five readings of each participant's arm: at rest, during the exercise, with arterial occlusion using a cuff to isolate blood flow in the forearm, and twice during recovery. The handgrip exercise is two minutes at 20 percent of the participants' maximum output, which was determined during their first of three visits to the lab.

"Isometric tasks are a part of everyday and occupational tasks and the isometric exercises provide us with additional information, and perhaps direction, regarding the mechanisms of our larger study," Holmstrup said. "Isometric exercise responses were a logical next step in our mission to better understand inter-arm blood pressure difference."

Researchers believe that exercise could be used as treatment for ISBPD, which is a difference of 10 millimeters of mercury or more between the two arms. Although a complete report is yet to be published, initial findings in the aerobic exercise study showed that, while the odds of an ISBPD response increased with exercise, the difference was smaller in recovery than before exercise.

"Any form of exercise has its benefits, but some people have preferences for aerobic or weightlifting," Neuscheler said. "The isometric may not have the exact same effect as aerobic exercise would have. There's a careful balance you have to achieve. You want to have positive effects but you want to make sure you don't have any harmful side effects."

Neuscheler received a Student Research, Scholarship, and Creative Activity grant from the University to compensate his hours in the lab, and last month he finished compiling the data from the isometric study.

"Lance is a knowledgeable student and a quick learner," Holmstrup said. "His success in the role had a great deal to do with ambition. He worked really hard, as the entire team did, last semester."

Once the data are collected and analyzed, Neuscheler will present the findings at conferences beginning in the fall and the results could potentially be included in manuscripts prepared by Holmstrup and Brock Jensen, associate professor of exercise and rehabilitative sciences, both of whom are leading three other manuscripts based on the aerobic study from 2017.

"The research has been a great opportunity to start up a project and work through the entire process and think about the best way it could be designed," said Neuscheler, who plans to apply to a post-graduate physical therapy school. "The biggest thing I got out of it was developing professionalism and working with subjects or clients. That will be a big part of my future as a physical therapist. Also, (I benefited from) developing critical thinking and working in an environment that strengthens relationships with the faculty and my peers."