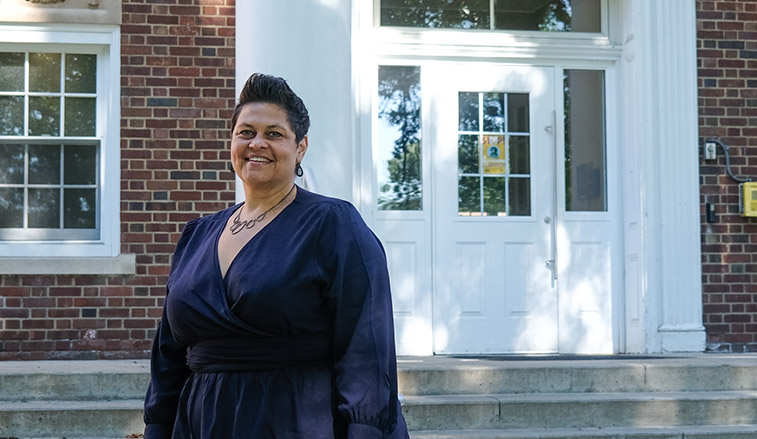 SLIPPERY ROCK, Pa. – When Ivory Dunlap set foot on Slippery Rock University’s campus shortly after being hired as SRU’s new director of the Office for Inclusive Excellence, she was already thinking about walking around campus in someone else’s shoes –– those of the students. A native of Butler and an SRU graduate, Dunlap will be well-suited to relate to students in her work that will focus on diversity, equity and inclusion from a student affairs perspective.

“I’ve been in their shoes,” said Dunlap who attended SRU as an undergraduate from 1991-94 and later earned her master’s degree in student affairs in higher education in 2013. “I understand that there is a smaller population of underrepresented students and a majority of the students are white. Being biracial myself and coming from a family that is from Butler County, I want to be able to help students who maybe aren’t from here and help them know where to go and what to do when they need to feel at home.”

“And it’s not just about students of color. When I think of diversity, I think of all aspects, from students who are differently abled to students of lower socioeconomic status. I've worked with diversity efforts for many years in many different aspects during my career, and the events (in our country) the last year brought everything to the forefront and that’s why this (role at SRU) is an opportunity that immediately spoke to me.”

Dunlap will begin her role at SRU July 12, replacing Corinne Gibson, who served as the OIE director before accepting a position as director of diversity, equity and inclusion in the Chancellor’s Office of Pennsylvania’s State System of Higher Education.

Dunlap worked the previous 14 years at Butler County Community College in a variety of positions, most recently as an associate professor and an academic counselor and retention specialist in BC3’s Academic Center for Enrichment in the Student Success Center. She was the first Black tenured professor at BC3, where she taught college success skills and human diversity, and was a course coordinator.

She also comes from a family that has broken racial barriers. Dunlap’s great grandfather, Clarence Dunlap, co-founded Black and White Express Trucking, the first Black-owned business in Butler, and her grandfather, Walter J. Dunlap, was the first Black trustee at BC3.

Her background also includes experiences working with victims of domestic violence and sexual assault. After completing her associate degree from BC3 in 1996 and while earning her bachelor’s degree in elementary education from La Roche College in 2005, Dunlap worked as a systems advocate for the Victim Outreach Intervention Center in Butler for five years. She joined BC3 in 2007 as the student facilitator for the Keystone Education Yields Program and later briefly served as the school’s disabilities coordinator.

“Ivory has a passion for diversity, equity and inclusion work and a tireless commitment to student success,” said David Wilmes, SRU’s chief student affairs officer. “She has served in a variety of roles working directly with students from historically marginalized groups, and we are excited to have her bring her expertise and passion to The Rock.”

The OIE establishes an understanding of diversity to welcome people of all abilities, ages, ethnicities, genders, nationalities, races, religions, spiritual traditions, socioeconomic classes and sexual orientations. It is made up of four concentrations: 1.) student transitions, which includes programming such as Jumpstart; 2.) mentoring; 3.) advocacy, which includes campus-wide diversity programming and workshops; and 4.) inclusion, such as the Women’s Center,  Pride Center and the  Veterans Center.

“(This job) is about making people feel welcomed,” Dunlap said. “First and foremost, I want people to know who I am and I want people to be able to use our office as a resource for all students. One of my first goals is to understand the campus climate (as it relates to diversity and inclusion) and get out and meet people and let all areas of campus know that I'm here and available.”

More information about the OIE is available on the SRU website.