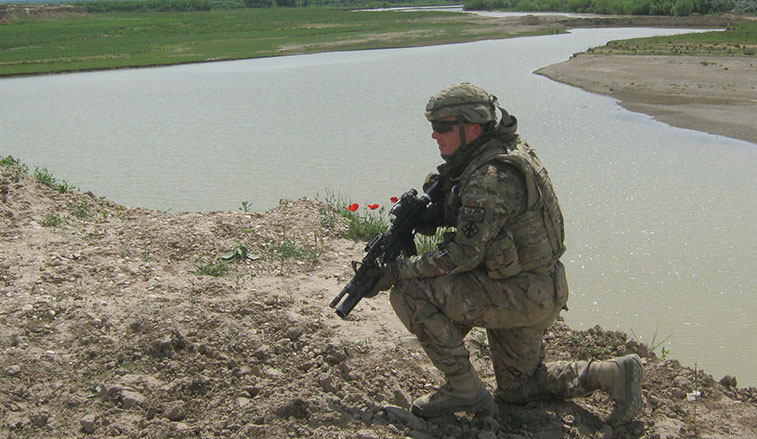 Gary Clark, an SRU assistant professor of physical and health education and an Army Reserve member, is shown on a dismounted patrol on the perimeter in Afghanistan in 2012. Clark nominated SRU for the 2018 Secretary of Defense Employer Support Freedom Award.

WASHINGTON, D.C. - Slippery Rock University has been recognized by the Department of Defense as one of 15 recipients nationally to win a 2018 Secretary of Defense Employer Support Freedom Award, the highest U.S. government honor to employers for support of National Guard and Reserve employees.

"It is my pleasure to recognize these 15 outstanding civilian employers," said Secretary of Defense James Mattis. "Our National Guard and Reserve members are a vital part of our national defense and deserve as much support as our country can provide. These 15 employers lead the way and we are grateful for their role in helping to keep our nation safe and secure." 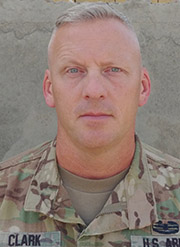 Nominations must come from a military member employed by the business or organization. Gary Clark, an SRU assistant professor of physical and health education and an Army Reserve member, nominated the University.

"The University has been fantastic when it comes to allowing me to fulfill my reservist duties," said Clark. "Military obligation can definitely place a burden on employers and in the 10 years I've been at SRU, I have been deployed twice.

"Between each deployment there have been field exercises each year ranging in time from two weeks to nearly a month. I have also had classes and training that are often one to three weeks in length, as well as normal battle assemblies that take time away from work. In my tenure at the University, my total military obligation has totaled four years.

"Through it all, the University has been incredibly supportive. It's not always easy to find someone with the background and expertise to cover some of the classes that I teach and pulling a faculty member away for a month during the middle of a semester is not easy for anyone; but through it all the University and my colleagues have always been supportive.

"Requests for leave have always been approved without issue. It is not uncommon while I am at a military class, training or deployment for them to just touch base with me in order to thank me and tell me that everything is under control and to not worry about work. It is that peace of mind that allows me to concentrate on my military obligations and not stress about my civilian employment."

Freedom Award recipients will be honored Aug. 24 at a ceremony hosted by the Pentagon. Joining SRU as honorees are:

"This is a fantastic honor for the University and recognizes the entire institution's commitment to providing support for our veteran employees and students to succeed. SRU values the contributions of each serviceperson makes to protect our freedoms," said Philip Way, SRU interim president. "I would like to thank Dr. Clark for his nomination and his service to our country."

The 2018 recipients were selected from more than 2,350 nominations received from guardsmen and reservists highlighting how their civilian employers went far beyond what the federal law requires to support them. The Freedom Award began in 1996 under the auspices of Employer Support of the Guard and Reserve to recognize exceptional employer support. There have been 250 honorees to date.

More than 100 students at SRU identify as veterans and an additional 300-350 students that identify as military-affiliated who are either reservists, activity duty military, contracted ROTC cadets or dependents in military families.