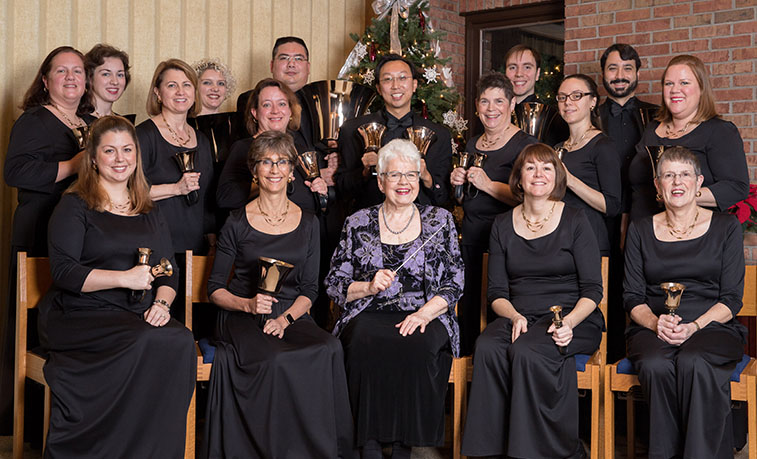 SLIPPERY ROCK, Pa. — Nancy Lutz might be tempted to spike her conducting baton like a football after retiring as the artistic director of Three Rivers Ringers, the Pittsburgh community handbell ensemble that she founded nine years ago. Lutz and her ringers are used to triumphant endings and roaring responses that are more common at stadiums rather than concert halls or church sanctuaries, like the time they performed a solo during the Pittsburgh Symphony Orchestra's Holiday Pops concert.

"No one heard that last chord because people were cheering as if they were at Heinz Field instead of Heinz Hall. It was like we had just scored a touchdown; it was incredible," said Lutz, a 1963 Slippery Rock University graduate with a degree in education. "The crowning achievement was being invited to play with the Pittsburgh Symphony Orchestra. That was a high honor to be accepted as visiting artists. I don't think anyone there heard handbells played at that level of performance."

They performed so well during that December 2015 concert, opening the second act with a solo setting of "First Noel," arranged by Cathy Moklebust, that PSO invited TRR back the following year to perform for the Holiday Pops concert.

Lutz retired as artistic director following TRR's 2019 spring concert season, which fittingly concluded May 19 with a performance at Mount Lebanon United Methodist Church, where Lutz is a member and where five of the founding members first performed in the church's handbell program.

"The church group was playing at a very high level, playing some of the hardest music," Lutz said. "We did a Christmas concert and a spring concert and we knew there were other people in the community who could be a part of (the group) as a community organization. We wanted to create a community professional group that was independent and available for concerts. Our mission was to expose more people to the art form and also play classical music that we were not able to do during a time of worship. We always wanted to do that and finally found the right combination of people to be able to do it."

TRR was formed as a nonprofit organization in 2010 thanks to friends of the musicians who provided pro bono legal and promotional services, along with Andrew Seay, who at the time, had recently completed a master's degree in arts management from Carnegie Mellon University. He helped manage the group and shared Lutz's artistic vision for what the group could become.

Nearly 25 musicians auditioned for 13 spots on the inaugural ensemble. The group would play to a capacity crowd of more than 200 people at Bower Hill Community Church for their first concert. There are currently 17 members who play as many as 15 concerts per year. Group members are provided a small stipend to cover travel expenses with the entire organization supported through donations. Equipment is shared with Mount Lebanon United Methodist Church.

Lutz said that perfecting the handbell art form is quite demanding and there's more to it than simply ringing a bell.

"The instrument isn't always very well played," Lutz said. "You think about a piano keyboard: each black and white key has been transformed into a bronze bell and it takes 13 to 16 people to play a piece. In order to do that, with that many people playing, you have to have a feeling for where the musical phrase is going. In an orchestra or a choir each person has control of the notes they are playing but we play more random notes in a sequence. Something set for bells (needs to be) unexpected and our concerts always have a lot of variety."

The role of artistic director is also very demanding, Lutz said. "Being able to choose music and put together a program that is varied, exciting and holds together can be a challenge." She typically began selecting music for the December concert season in June with weekly, three-hour rehearsals beginning in August. Due to her retirement, those duties will be passed on to TRR's interim director with Lutz staying connected as artistic director emerita.

Lutz, who resides in Mount Lebanon with her husband, Jim, has two daughters, Shannon Rae and Kristin. Lutz fondly recalls her time at SRU, saying that was when she learned how to teach, a skill she continued to use through her final days with TRR.