Yes, SRU, you can purchase the Dr. Phil inspired shirt 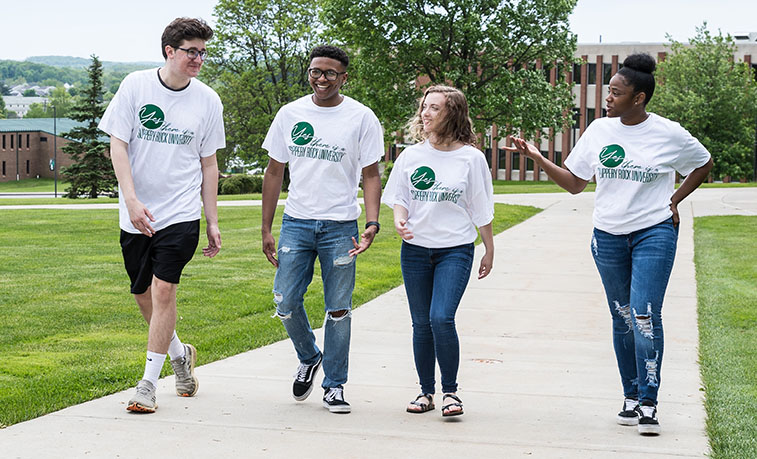 “Yes, there is a Slippery Rock University” T-shirts are available at the SGA Bookstore while supplies last.

SLIPPERY ROCK, Pa. — When Dr. Phil mentioned in an interview most people don't want to brag that their child goes to SRU, a national firestorm erupted on social media showing him just how wrong he was. Dr. Phil to his credit apologized and noted that he didn't think SRU really existed.

To clear up any mistake about the University's existence, President Behre presented each participant at commencement rehearsal with a "Yes, there is a Slippery Rock University t-shirt." A story about the Dr. Phil encounter ran in the summer issue of The ROCK magazine, which led to another flurry of interest, this time from folks wanting to know where to get the shirt.

Beginning today, the shirt is available at the SGA Bookstore.

Shirts are $10 with $5 from the sale of each shirt going to the SRU Class of 2019 General Student Scholarship Gift.

"This is definitely about turning a perceived negative into a positive," said Behre. "I do believe Dr. Phil when he says he was unaware of our University and I've thanked him for his honesty and sincerity.

"Providing the shirts to the Class of 2019 was something fun we thought to do keep the conversation going about SRU and the terrific things we're doing for students. That gesture has now manifested itself into a desire by many to help spread the word that 'Yes, there is a Slippery Rock University' and in doing so, help support those students that may need financial assistance in the pursuit of their educational goals. It's a win for everyone."

For a complete recap of the Drs. Bill and Phil exchange, see pages 14-15 of the June edition of "The ROCK" magazine.