SRU alumna helps those in need help others 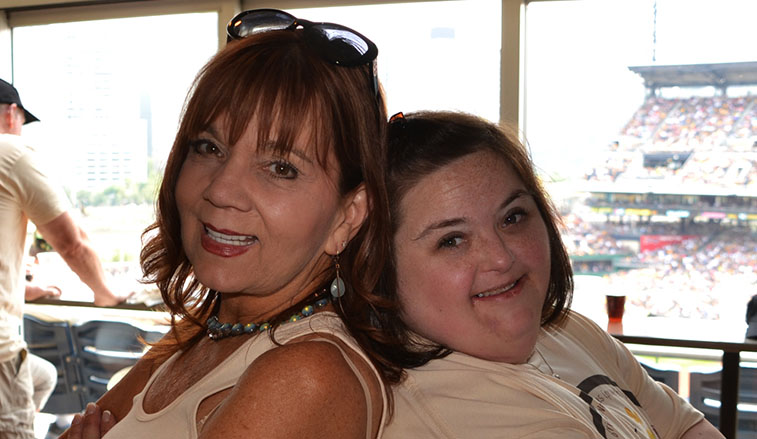 From left, Susan Cataldi, a 1980 Slippery Rock University graduate, poses with a member of the Team Friends crew at a recent Pittsburgh Pirates game. Team Friends, a nonprofit agency founded by Cataldi, supports people with intellectual disabilities by providing social activities, life skills and the chance to give back to their communities

SLIPPERY ROCK, Pa. - As a teenager, Susan Cataldi spent many summers working as a camp counselor for the Easter Seals Society, a nonprofit that provides service, education, outreach and advocacy for people with intellectual and physical disabilities.

That work and exposure to those in need would eventually spark Cataldi, a 1980 Slippery Rock University graduate with bachelor's degrees in special education and elementary education, to create her own nonprofit organization, Team Friends.

The agency, which supports people with intellectual disabilities by providing social activities, life skills and the chance to give back to their communities, recently celebrated its third year of operation.

"From the age of 14, I always knew what I wanted to do," Cataldi said. "When I came to SRU, I knew special education was the right thing for me and I loved it. SRU really molded my education and opened up a lot of doors for me down the road."

That road led Cataldi to Florida, where, following her time at The Rock, she continued her studies at Florida State University, receiving a master's degree in special education in 1993.

She then moved back to western Pennsylvania and accepted a job as a life skills teacher in the Fox Chapel Area School District, where she remained until her retirement in 2013. Not one to stand by idly, Cataldi remained active in retirement, gathering a group of friends in November 2014 at which time she posed the question: "Can we create something for the students we have taught throughout the years?"

That question inspired a visionary letter that was mailed to a group of Cataldi's former students, as well as their parents and peer helpers, asking about interest in starting an organization dedicated to supporting those with disabilities. The response was overwhelmingly positive and by January 2015, the first meeting of Team Friends was set. Soon after, the sisters of Alpha Omicron Pi, to which Cataldi belonged while at SRU, adopted the agency as their local philanthropic project.

The nonprofit stages monthly meetings that include socialization and learning components; while also hosting bimonthly philanthropic events including compiling care packages and blankets for people in need, tending to community center gardens and conducting food drives.

Cataldi, who received numerous awards during her teaching career including the Gibsonia Walmart Teacher of the Year Award (2002) and the Scott Forman Excellence in Inclusion Award (2009), added another accolade to her collection in 2017 when Team Friends received a Jefferson Award for Public Service from the Jefferson Awards Foundation. The foundation, founded in 1972 by Jacqueline Kennedy Onassis, Robert Taft, Jr. and Samuel Beard, celebrates and honors individuals and organizations dedicated to public service.

"To receive a Jefferson Award is really quite an honor," Cataldi said. "That really put us on the radar ... on the map; and has led many people to learn more about us."

As the community's awareness of Team Friends continues to grow, Cataldi and her husband Ted, a member of the agency's advisory board, are eagerly looking toward the future with an eye on opening additional chapters across western Pennsylvania like the brand new Westmoreland County agency.

"The Jefferson Award has really inspired us to do even more than we have before," said Cataldi. "Some people, when they win awards, have reached their peak. Everything stops because they think, 'That's the top, that's the best we can be.' To me, if anything, it's fired us up to do more, to continue to reach out to more people and do greater things."