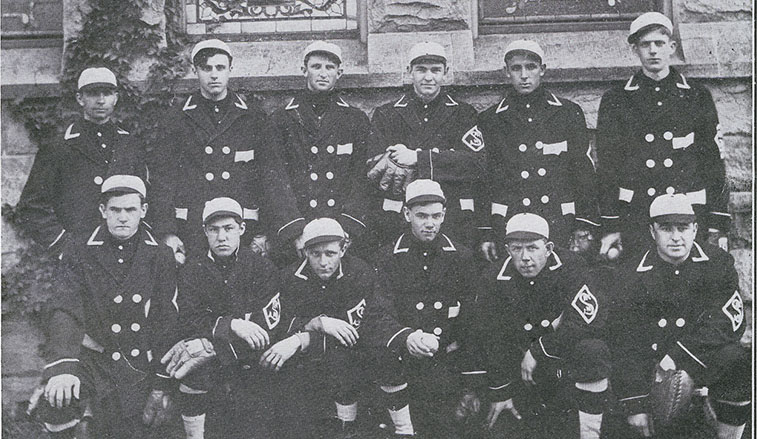 Bob Shawkey, fourth from left in the back row, played on the baseball team at Slippery Rock State Normal School in 1910. Shawkey pitched for 15 years in the major leagues and was the manager for the New York Yankees in 1930.

SLIPPERY ROCK, Pa. - Fans of Slippery Rock University baseball, whether they cheer for the National or American league, are rightfully proud these days. A pair of former SRU student athletes - Matt Adams with the Washington Nationals and Lou Trivino with the Oakland Athletics - are holding down roster spots, making their mark and doing The Rock proud.

But neither were the first to go from SRU to The Show and sustain success as a major leaguer. That honor belongs to Bob Shawkey.

Shawkey, who attended SRU for a semester in 1910, is the most accomplished former Rock baseball player and the first to compete in the major league's post-dead ball era. Shawkey played 15 seasons in the majors and even served as manager for one season on a New York Yankees team that featured former teammates Babe Ruth and Lou Gehrig. 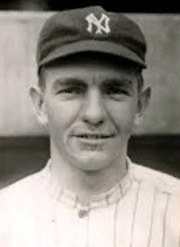 "Anybody who makes the big leagues is going to be noteworthy because making the majors is certainly an accomplishment, but Shawkey played for two of the best teams in his era, the Philadelphia A's and the New York Yankees," said Alan Levy, SRU professor of history and author of two baseball books, including a biography of Joe McCarthy, the Hall of Fame manager who replaced Shawkey with the Yankees in 1931. "(Shawkey) was not a Hall of Fame pitcher himself, but he was darn good, enough to not just to make it into the majors but to stay."

Shawkey was a starting pitcher for the Yankees' first World Series championship team in 1923 and a member of the 1927 championship squad, nicknamed Murderers' Row and widely considered the best team in baseball history. Overall, the Yankees have won a record 27 World Series titles, with Shawkey being a part of the first two.

"Anytime you name the greatest baseball team of all time, everyone has got the '27 Yankees on their list," Levy said. "They are the gold standard that, one way or the other, has to be reckoned with. Shawkey was in there playing with some of the great ones."

But 17 years earlier he was playing at SRU, then known as Slippery Rock State Normal School. A native of Sigel, Jefferson County, Shawkey pitched for The Rock squad and was noted in the yearbook, The Anamnesis, for "the number of people he can strike out in one game." But his best path to big-league stardom was not on a college campus, but rather via semi-pro or minor league teams, which were more prevalent at the time.

"If he enrolled here he undoubtedly had some plans of becoming a teacher, at least as a fallback position," Levy said. "The scouts weren't looking at collegiate players. The best route to the majors would have been through the minor leagues. Every town had a little ball team. The local team was your focus and people were really rabid about the local teams. People would play on those teams in hopes that someone would notice them, have good statistics in the newspaper, and someone at a higher-level minor league like Toledo or Columbus would pick them up."

The summer after his only semester at SRU, Shawkey played for a semi-pro team in Bloomsburg, was spotted by a scout for the Philadelphia A's and played the following two seasons for minor-league teams in Harrisburg and Baltimore. 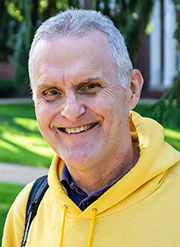 As a 22-year-old rookie in 1913, Shawkey started 15 games for the Philadelphia A's team managed by Hall of Famer Connie Mack that went 96-57 and won the World Series. However, Shawkey's best moment came later, in 1923, when he was selected to start the first game played in Yankees Stadium.

As noted in a lengthy biographical essay by Stephen Rice, the April 13 opener at the newly built Yankees Stadium attracted more than 74,000 spectators, shattering baseball's previous attendance record by nearly 27,000 fans. Shawkey later called the 4-1 win over the Boston Red Sox, in which he pitched a complete-game, three-hitter, "the greatest thrill of my life." Shawkey won 195 games in his career, including four seasons as a 20-game winner, while posting a career 3.09 earned-run average. He played on seven teams that won the American League and three World Series winners.

Shawkey was respected enough by the Yankees to be selected to replace his former manager, Hall of Famer Miller Huggins, who died during the 1929 season. Although Art Fletcher finished the 1929 season, Shawkey was named skipper in 1930, but with the high standards set, an 86-68 record was not good enough as the Yankees finished 16 games behind Mack's Philadelphia A's.

As Rice noted in his essay, Shawkey remained a fixture at Yankees special events and old-timers' games, throwing out the ceremonial first pitch at the Yankees Stadium 50th anniversary game in 1973 with the same ball that was used in 1923.

Shawkey died Dec. 31, 1980, in Syracuse, New York, at the age of 90. His New York Times obituary attributed a quote by Shawkey from a Brooklyn newspaper years earlier: "I didn't expect to play ball for a living at all when I was a youngster, but I guess nature took its course."

Like Adams and Trivino who followed a century later, that course came through Slippery Rock.