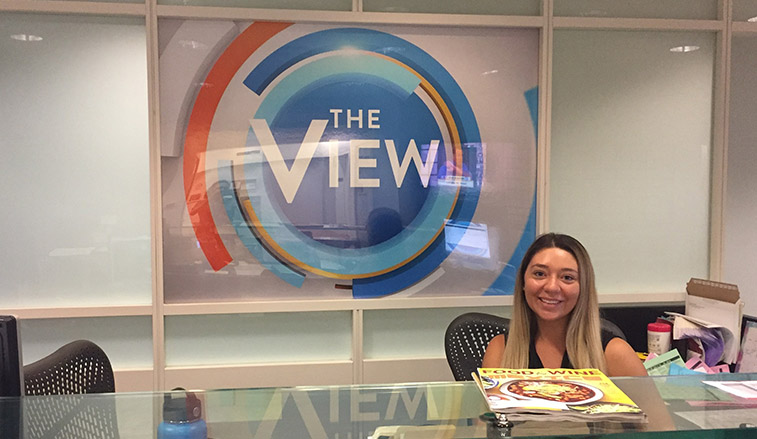 Slippery Rock University student Lydia Perozzi is interning on the set of the ABC daytime television talk show “The View” this summer.

SLIPPERY ROCK, Pa. - When Lydia Perozzi landed an internship on the set of the talk show "The View," she anticipated being a gofer. But for this Slippery Rock University student, spending the summer working with the Disney ABC Television Group in New York City has exceeded her expectations.

"I figured I'd be getting people coffee, but I didn't care because it was still 'The View,' but they have us doing a lot of cool, hands-on things," said Perozzi, a senior communication major from Belle Vernon. "I like the high-speed environment. I don't like sitting around at a desk. You are all over the place. It's a little bit of everything."

"The View," described by ABC as its daytime morning chat fest, is in its 21st season and features cohosts Whoopi Goldberg, Joy Behar, Paula Faris, Sara Haines, Sunny Hostin and Meghan McCain discussing the most exciting events of the day.

Perozzi is one of five interns who rotates assignments for each weekday's hour-long, 11 a.m. show. One day she could be observing and assisting in the editing room, the next in the control room or even behind the scenes on the set working with camera operators and audio technicians. She gets to wear a headset and listen to the director and shadow the producer during the show and participate in production meetings.

"If we have an idea for the show, we can pitch it," said Perozzi, who helped brainstorm segments that featured guests on the show, including the likes of Chrissy Teigen and John Legend. "It's really hard to get an idea picked up, but it's still neat that we can (provide input)."

Working in New York City is not new to Perozzi. Last summer she interned with the Sinclair Broadcast Group's Circa News. While there, she met Jordana Kalmanowitz, who booked talent for Sinclair and was a former assistant on the set of "The View." Kalmanowitz's recommendation helped Perozzi land her current internship after she applied to several New York-based talk shows.

"It's not that I have to be in the city, it's just New York City in particular; I love New York," said Perozzi. Last summer she lived with relatives in nearby New Jersey but this year has an apartment in New York. "There's so much going on all the time. For communication (jobs), it's a great place to be."

Through her internships, Perozzi has a better appreciation for her classes at SRU. The editors on "The View" got their start using software like Adobe Premier that Perozzi learned in her Interactive Media class with David Keppel, assistant professor of communication. She was familiar with the terminology and formatting of television script writing thanks to her Journalistic Writing class with Joseph Harry, associate professor of communication.

Perozzi was also thankful for the collaborative group project skills learned in her Case Studies in Public Relations and Integrated Communications course with Allison Peiritsch, assistant professor of communication.

"We would always complain about all the group work (in Case Studies) and how we don't have enough time to meet up with three days to complete a project, but that class taught me time management and working as a team and I see that a lot in the professional environment," Perozzi said. "There's not one person who can do the show all by themselves. It's such a team effort."

After Perozzi is done navigating the west side of Manhattan, she'll return for her senior year at SRU. However, she hopes to once again return to New York after graduation and seek full-time work in either television, radio or online media as a producer or talent booker. As someone who thrives is a fast-paced environment, she may still have to reach for the coffee, but only for herself.

"I really have to hustle when I'm (working) here, as everybody does," Perozzi added. "I learned a lot from that."