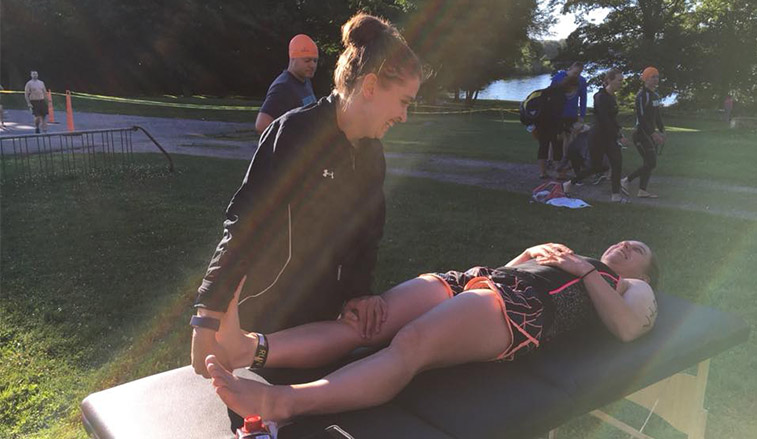 Slippery Rock University students in the Doctor of Physical Therapy program, like Erica Burnworth (left), offer free physical therapy treatment for the community, such as competitors at a recent triathlon at Moraine State Park in Portersville. As part of Slippery Rock Pro Bono Physical Therapy, a student-run organization, the students will offer free physical therapy treatment from an on-campus clinic this fall.

SLIPPERY ROCK, Pa. - Even with medical insurance, the cost of physical therapy can cause patients to stretch their dollar while stretching their muscles. However, students at Slippery Rock University are easing the burden by creating an alternative: a free physical therapy clinic for the local community.

Slippery Rock Pro Bono Physical Therapy is a student-run organization at SRU that is establishing a free physical therapy clinic for the public with graduate students from SRU's Doctor of Physical program volunteering as therapists. While the clinic is already three years in the making, a grant recently awarded to SRPBPT will help get the clinic up and running this fall.

"I love building relationships with people, I love helping people and I love physical therapy," said Amber Kilgore, a graduate student majoring in physical therapy from Slippery Rock who is the president of SRPBPT. "What better way to do all three things and what a great opportunity to be able to do it before starting our careers? I think it's just terrific for students to work together and give back to the community. It's a big part of our profession."

SRPBPT received a $3,155 grant from Move Together, Inc., a nonprofit organization that increases access to quality rehabilitation medicine for people all over the world. Although SRPBPT already conducts fundraising and receives funding from the Slippery Rock Student Government Association toward its operating budget, the Move Together grant was needed to purchase sustainable equipment such as high-low treatment tables and a recumbent stationary bicycle.

The clinic will be housed in the School of Physical Therapy Building, Room 325. Patients will be referred to SRPBPT from local professional clinics in Butler, Lawrence, Mercer and Venango counties once it is determined that the patient cannot afford treatment, because they do not have insurance, the insurance copay is too costly or they maxed out their insurance benefits to continue treatment. SRPBPT will also partner with local clinicians who will mentor SRU students.

According to James Eng, associate professor of physical therapy and the SRPBPT adviser, student-run, pro-bono clinics are rare, especially a volunteer-based clinic like SRPBPT, because of the time commitment.

"It takes a lot of work and development, and it's work the students have to do between classes," Eng said. "These students are doing it on their own time as busy as they are, so it's difficult to pull it off and this will be a credit to their hard work."

There are 100 students enrolled in the two-year Doctor of Physical Therapy program at SRU and SRPBPT organizers anticipate about 25 interested volunteers would be able to treat as many as four patients per evening as early as October.

The idea for starting a student-run, pro-bono physical therapy clinic at SRU was first developed by Ben Richards, who earned his doctorate in physical therapy from SRU in 2017 and his bachelor's degree in exercise science in 2014. As an SRU student, Richards attended a conference in Philadelphia with Eng where they learned how schools like Widener University created a pro-bono clinic. SRU is the first school in Pennsylvania's State System of Higher Education to establish such a clinic and SRPBPT will be the only one of its kind in western Pennsylvania.

"I was excited about (the clinic) when I came here because it's a unique opportunity to be involved in the community and leave a lasting impact helping others," said Maryellen Davis, a graduate student majoring in physical therapy from Falls Church, Virginia, and secretary of the SRPBPT. "It's important for people in health professions to use their skills throughout their careers to help other people when they can. It's awesome that we are (now) starting this clinic."

For more information about SRPBPT, email Eng at james.eng@sru.edu or click here to visit the SRPBPT Facebook page.