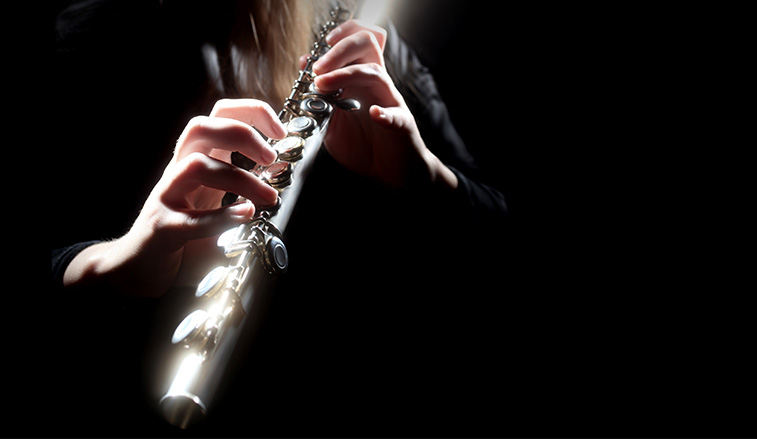 SLIPPERY ROCK, Pa. - A group of seven Slippery Rock University student musicians are participating in the 46th Annual National Flute Association Convention now through Aug. 12 in Orlando, Florida. The NFA is the largest flute organization in the world with more than 5,000 members from more than 50 countries.

The six flutists prepared for the convention with the help of Cassandra Eisenreich, assistant professor of flute and director of SRU's flute ensemble and flute studio. Eisenreich, who currently serves as the pedagogy chair for the NFA, will also perform at the convention with the Professional Flute Choir and with a quartet of flutists from Pittsburgh.

For Lilly, Kammer, Eastman, Kochis and DeLorenzo, this will be their second performance at an NFA convention, having done so as part of SRU's flute ensemble last year when the convention was staged in Minneapolis.

"Being selected to perform was a huge goal I had for myself during my time at SRU, and I was so excited to learn that I achieved it," Eastman said. "I spent hours every day last fall practicing the audition piece and working extremely hard."

Eastman is excited for the convention and the opportunity to work alongside professional flutist Jim Walker. Walker's resume includes performing as principal flute with the Los Angeles Philharmonic and the founder of the jazz quartet Free Flight.

"Jim Walker is an icon in the flute world and to be able to work with him across a span of five days is so exciting," Eastman said. "It's always really inspiring to learn from people you look up to and aspire to be like."

However, SRU's flutist contingent won't be the only University musicians attending the convention.

Devon Klaas, a senior music therapy and music education double major and tuba player from Pittsburgh; Jonathan Helmick, assistant professor of music, director of bands and a euphonium player; and Kathy Melago, associate professor of music and flutist, will be performing alongside SRU alumnus Mike Zech. Zech, who graduated from SRU in 2016 with a degree in music education, is currently pursuing a master's degree in tuba performance at Duquesne University.

The musicians will perform a piece composed by Stephen Barr, SRU assistant professor of music, entitled "Monuments of the West: Four Images for Flute and Tuba Euphonium Quartet."

As the only SRU student performing with the small ensemble, Klaas said he is looking forward to expanding his musical horizons and performing with professional musicians, as well as learning from those around him.

"It's a really cool experience, especially being so young" said Klaas. "This is a great opportunity for someone my age and I'm glad I get to even experience it."

Eastman is hoping the new experiences and lessons will help her become a more well-rounded musician. "You can learn something new from every person you meet," she said. "And the opportunity to travel and meet people from all around the world is sure to bring new knowledge and lasting memories."