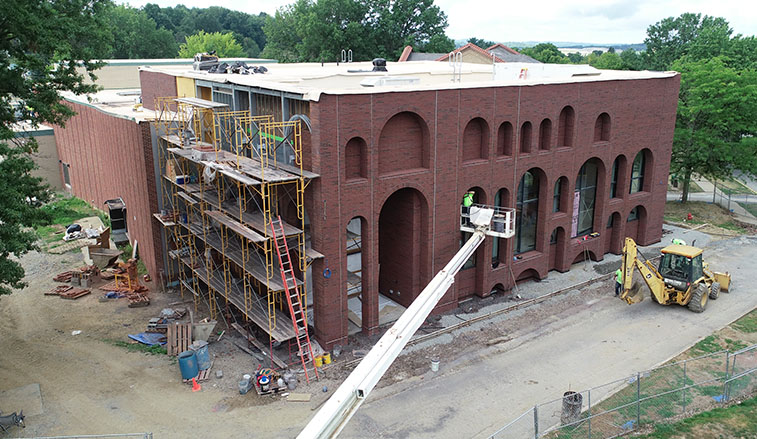 Brickwork on the front entrance of Miller Auditorium was among the construction projects completed at Slippery Rock University this summer.

SLIPPERY ROCK, Pa. — Face-to-face instruction at Slippery Rock University wasn't the only thing that came to a halt last spring when the coronavirus pandemic swept across the nation. Along with it was a stoppage of construction work by state orders. But when Pennsylvania Gov. Tom Wolf gave the green light for building projects to begin again, May 4, crews at SRU were once again on the job.

While a handful of projects scheduled to begin in the summer of 2020 were postponed until next year and a few others were delayed, construction ramped up enough that people who are returning to campus for fall semester will probably notice a few changes.

"COVID-19 has had a major impact on our construction schedule," said Scott Albert, assistant vice president of facilities, planning and environmental safety. "The state shut down all construction from mid-March to early-May and we had to cancel some bids for work this summer because we didn't know if we were going to be allowed to perform the work. But we continued work on the Performing Arts Center and what folks will notice immediately when they return is the completed brickwork on the front face of Miller Auditorium."

A combined $32.5 million renovation to three performing arts buildings, West Gym, East Gym and Miller Auditorium, started in June 2018 and is about 90% complete, according to Albert. Those buildings are expected be available for installation in November, barring any setbacks in the coming weeks.

Upon completion, Miller Auditorium will be expanded by 9,500 square feet and feature a 753-seat performance space, two dance studios, an orchestra pit, a new lobby and a scene shop. West Gym will house offices and classrooms for SRU's Dance and Theatre departments and a dance studio with additional support areas for both departments. East Gym updates will include a black box theater with seating for 296, a costume shop, acting and design classrooms and a dance studio.

Other projects that are in progress or completed over the summer include:

Another five projects, totaling more than $3 million, would have been conducted this summer but those projects will be delayed until next year because of shutdowns related to COVID-19.