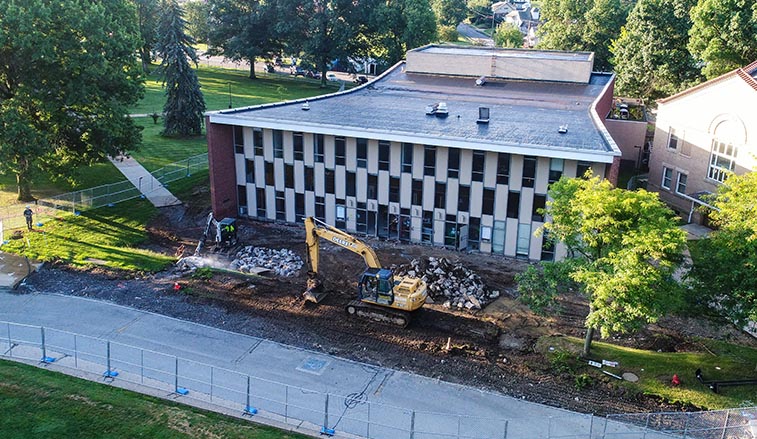 Construction at Slippery Rock University during the summer included renovations to Miller Auditorium, part of a $29.2 million performing arts project that includes East and West Gyms, which is scheduled to be completed in 2019.

SLIPPERY ROCK, Pa. - The summer construction rush might be over at Slippery Rock University, but that doesn't mean all the work is finished.

Three major projects totaling $13 million improved residence spaces in North Hall and ROCK Apartments, while a renovation and addition to Strain Safety Building continues. North Hall and ROCK Apartments had the first of two phases completed, with the second phases scheduled to resume next summer, while the Strain project is now projected to finish by the end of September.

A combined $29.2 million renovation to three performing arts buildings, West Gym, East Gym and Miller Auditorium, started in June, and will continue into 2019.

"People returning to campus will notice projects that have been completed during the summer and ongoing construction for more long-term projects like renovations to the performing arts buildings that are well underway," said Scott Albert, assistant vice president of facilities, planning and environmental safety. "While there were unanticipated difficulties during the Strain Safety Building construction that delayed its completion, we appreciate everyone's patience for any disruptions as we continue to improve the campus."

The performing arts project remains on schedule as crews are in the midst of demolition work. During the renovations, the Dance Department will be housed in Spotts World Culture Building and the Theatre Department will continue to be housed in the University Union. Another change affecting the campus as a result of the project is limited access to most of Morrow Way, which connects Main Street to Campus Drive. A portion of that road will be restricted for the entirety of the construction.

Projects completed during the summer include a new press box at the Jim Egli Soccer Field, several asphalt repair and seal-coating projects and upgrades to the accessibility to Morrow Field House, including improved handicap accessible parking spaces and new automatic door operators and ramps. Improvements to the Softball Field, including fencing and underground drainage, are near completion.

Overall, Albert said there are more than 20 projects on campus in various phases of construction.