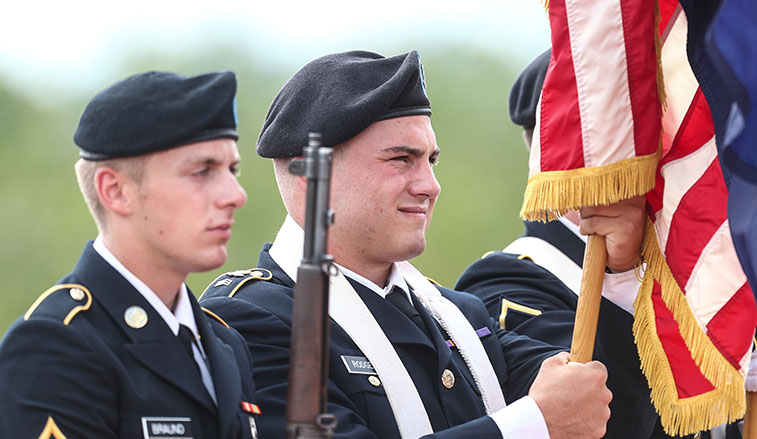 SLIPPERY ROCK, Pa. - Every day men and women in uniform risk their lives in service to their country and local communities. In recognition of their service and to remember those who have made the ultimate sacrifice, Slippery Rock University will host its annual "Salute to Military and First Responders Day" Sept. 29.

Loudon, formerly of Brockport, graduated from SRU in 2005 with a degree in environmental health and died while deployed in Iraq, Oct. 17, 2006. Prior to his passing, Loudon had been corresponding by email with Patrick Burkhart, SRU professor of geography, geology and environment. Loudon, who took Burkhart's hydrology course at SRU, was seeking advice to find alternative water supplies for villages in Iraq with contaminated wells.

Loudon's family, who is helping organize the Fallen Rock Dash, asked Burkhart to offer opening remarks at the race.

"I'll offer words of appreciation for the soldier's service and the enduring memory of those departed, lest they not be forgotten," said Burkhart, who was also an academic adviser for West, formerly of Crafton and a 2002 SRU graduate who died in combat in Iraq, July 24, 2006. "The soldiers I worked with both pursued excellence and held themselves to high standards in all aspects of life. I'm deeply honored to speak on their behalf, to cherish their memories and pay tribute to their ultimate sacrifice."

Click here to download a registration form for the race or email fallenrockdash@gmail.com to request more details.

Another fallen SRU alumnus who will be honored is Officer Brian Shaw, who died in the line of duty for the New Kensington Police Department, Nov. 17, 2017. Shaw, a former kicker on The Rock football team, graduated in 2015 with a degree in criminal justice. Shaw's family will be recognized prior to the 6 p.m., Sept. 29 football game.

The SRU coaching staff will wear a sleeve print on their shirts with a shield that says "In Memory of Officer Brian Shaw: To Serve and Protect." SRU football players will wear helmet decals in honor of Shaw for the entire season.

From 4-6 p.m. fans are encouraged to visit a military and first responder display in the parking lot adjacent to the stadium. Activities planned include:

• The Pennsylvania National Guard will have interactive displays that will include a rock climbing wall, M777 and M119 howitzer cannons, various weapons, helmets and other body armor, as well as a sports trailer for kids. All will be available free of charge and open to the public.
• The Slippery Rock Volunteer Fire Department will have one of its fire trucks on display in the stadium parking lot, displaying a large American flag from its ladder.
• Veterans groups will also have booths with information and giveaways near the stadium entrance, including a representative from the VA Butler Healthcare.

All events are free and will open to the public.

All military veterans, current military personnel and first responders will be admitted to the game for free and will be asked to stand and be recognized during a timeout. The Army ROTC is also hosting alumni from its program during a tailgate party before the game.

"This is a great way for the community to gather in one place to honor military, veterans and first responders," said Capt. Joe Barrow, assistant professor of military science. "This is also a great event for our cadets to make connections with alumni and hear advice from folks who have been in their shoes."

Fans can show their support for military personnel and first responders by purchasing a specially-designed camouflage T-shirt at the SGA Bookstore located inside the Smith Student Center or at the gate on game day.

This year's event marks the sixth consecutive year that SRU is hosting a salute to military and first responders' day. The event is sponsored by SRU's University Trademark and Licensing Department, the Athletic Communication Office, ROTC, the University Bookstore and University Athletics.