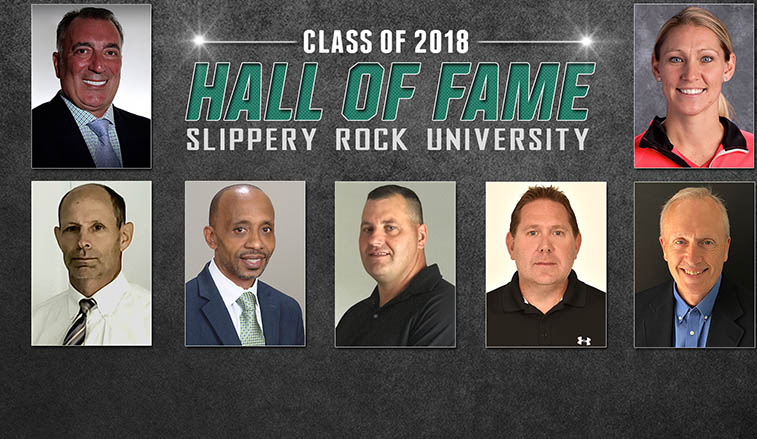 The 35th annual induction ceremony will take place Sept. 29 prior to SRU's home football game against Mercyhurst University. The event will be hosted in the Smith Student Center ballroom and begins with a social hour at 1:30 p.m., followed by dinner and the induction ceremonies at 2:30 p.m. The induction class will then be recognized during halftime of the 6 p.m. football game at Mihalik-Thompson Stadium.

Tickets for the 2018 SRU Athletic Hall of Fame induction ceremonies are $50 each. No tickets will be available on the day of the event. Tickets can be ordered online by clicking here or by calling the SRU Foundation at 724.738.2182.

The addition of the seven-person Class of 2018 increases the number of former Rock student-athletes, coaches and contributors inducted into the Hall of Fame to 244.

The following are brief profiles of members of the Hall of Fame Class of 2018, listed in alphabetical order. 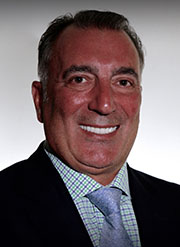 Baroffio, a native of Pittsburgh, was an AP Little All-America selection as an offensive lineman on the 1979 Rock football team. He served as a co-captain on the 1980 squad in his third year with the program and wrapped up that season by earning his second straight All-PSAC and All-ECAC selections. Baroffio, described by his coaches as a physical, strong and durable lineman, was also named All-District by the Pittsburgh Press in both 1979 and 1980.

He and his wife, Mary Lynn, reside in Bethel Park. They are the proud parents of three adult children, Alisa, Alexander and Angelina. Baroffio currently serves as the managing director of institutional fixed income sales at R.W. Baird and Co. in Pittsburgh. 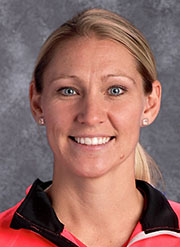 Barrett enjoyed one of the most successful careers in SRU track and field program history with the majority of that success coming in the hurdles. She earned a total of six All-America honors during her career, while winning or sharing PSAC titles in 15 different events. At the time of her graduation in 2007, she owned seven SRU and PSAC all-time records as an individual or member of a relay. She still owns four SRU records to this day (outdoor 100-meter hurdles and 4x100m relay, indoor 55-meter and 60-meter hurdles).

Barrett won six total PSAC titles in hurdle races outdoors alone, winning three 100-meter hurdle and three 400-meter titles. She also won three outdoor titles as a member of the 4x100-meter relay team and picked up two titles as a member of the 4x400-meter relay team. She was named the PSAC track MVP twice and was named the overall MVP following the 2017 PSAC Championships. She was also named the PSAC MVP indoors that year after winning her second 60-meter hurdle and 4x400m relay titles.

Barrett currently resides in Franklin with her husband, Benjamin, a fellow SRU alumnus, and their two children, Carter and Chase. She works at the Cranberry Area School District teaching health and physical education to female students in grades 7-12. She also serves as the head girls cross country coach. 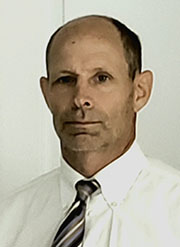 Johnson, a high school state champion in Iowa, transferred to SRU at the beginning of his sophomore year after placing fourth in the junior college national championships while wrestling for Brevard College in Florida as a freshman. He posted a 21-17-1 overall record in his first year at SRU in 1980-81 before embarking on a dominant run over his final two years.

From 1981-83, Johnson posted an overall record of 77-12-1 while wrestling at the 126-pound weight class. He racked up a 25-2 record in dual matches over those two years and went 52-10 in tournament competition. He also capped both of those seasons with a pair of titles, claiming both the PSAC and East Regional crowns at 126 pounds. He finished off his three-year career at SRU with an overall record of 98-29-7.

Following his graduation in 1983, Johnson embarked on a career as a chiropractic physician. He completed his training at Life University in Marietta, Georgia, where he graduated top of his class. He began practicing in his current hometown of Madison, Alabama in 1989, where he operates the Spine and Joint Center of Madison.

Jerry and his wife, Renee, are the proud parents of three sons, Cody, Cole and Cade. 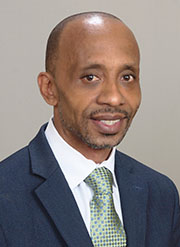 Russell appeared in an SRU record 117 games from 1986-91, starting in 87 games during one of the best stretches in program history. He averaged 9.7 points 5.9 assists and 2.2 steals per game over the course of his career, finishing up with SRU records of 686 assists and 254 steals. Russell also ranks seventh all-time at SRU in 3-pointers made (101) and finished his career with 1,137 points, 285 rebounds and a shooting percentage of .471.

Russell, a native of Front Royal, Virginia who now resides in Manassas, Virginia, has spent the last 19 years as a pricing analyst for Northrop Grumman. He remains active in both communities and has volunteered at numerous basketball camps over the years, working with both boys and girls basketball in the Virginia and Maryland areas to support the growth of the game. Russell is also active in organizing Omega Psi Phi fraternity events. He is the proud father of two college-aged daughters, Carlise and Alyssa. 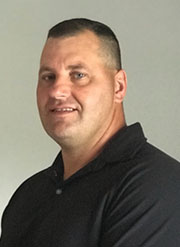 Sikora appeared in 41 career games as a defensive lineman over a four-year career at SRU from 1989-92. He recorded a total of 270 tackles, 37.0 tackles for loss, 13.0 sacks, four forced fumbles and four fumble recoveries, with most of those numbers coming over the last three years. He ranks 11th all-time at SRU in tackles for loss, 18th in total tackles and 23rd in sacks.

Following his career at SRU, Sikora continued a playing career with multiple franchises in the Arena Football League. He won championships in 1999 as a member of the Albany Firebirds and in 2006 as a member of the Chicago Rush, a year in which he was named the Rush's Lineman of the Year.

Sikora serves as a youth counselor with the Alternative Community Resource Program and also dedicates his time to serving as a football and track and field coach at Central Cambria High School in Ebensburg. He and his wife, Stephanie, are the proud parents of three daughters, Jaylee, Jewel and Jemma. 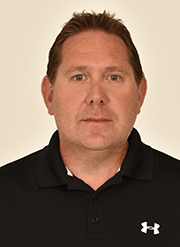 Thompson could have been inducted on the merits of either his playing career or his coaching career, which were both exceptional during his tenure at SRU. As a player, he appeared in 72 games from 1994-97, tallying 58 career points on 25 goals and eight assists. He still ranks 14th all-time in goals, 16th in games played and 18th in points in SRU history. Thompson bookended his playing career with All-PSAC honors in 1994 and 1997.

Following his playing career at SRU, Thompson embarked on a coaching career that saw him named head coach of his alma mater in 2002. He coached The Rock men's soccer program from 2002-09, winning the second-most games in program history and posting an 81-66-9 overall record. His last six seasons at the helm produced the most wins in SRU history over a six-year stretch and resulted in a PSAC title and No. 1 seed in the Atlantic Region in the NCAA playoffs in 2009. That title was the second of his tenure as head coach, joining a 2005 title, but came in dramatic fashion as SRU knocked off the No. 1 team in the nation, Millersville, in the PSAC title game in front of more than 1,200 fans. Thompson's 2009 team finished the year ranked 12th in the final national poll. He was honored three times by his peers as the PSAC Coach of the year, including both of his last two seasons at SRU in 2008 and 2009.

Thompson, who was inducted into the SRU Soccer Ring of Honor in 2013, left The Rock after the 2009 season and led Lees McRae College to a 13-5-3 record, a league title and a trip to the NCAA playoffs. He became head coach at the University of D.C. in 2011, where he remains today. He and his wife, Danielle, are the parents of two sons, Liam and Joshua. They reside in Alexandria, Virginia. 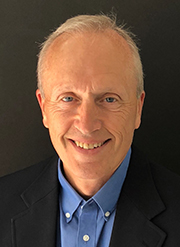 Walker was a four-year letterman on the track and field team from 1974-77 that saw most of his success in the 110-meter hurdles. He won PSAC titles in 1976 and 1977 and was a three-time national championship qualifier in outdoor track and field, competing at the national meet in the 110-meter hurdles from 1975-77. He served as team captain of the indoor and outdoor teams his final two seasons in 1976 and 1977.

Following graduation from SRU in 1977, Walker joined the U.S. Navy and graduated at the top of his class from Aviation Officer Candidate School. He served as a pilot for the U.S. Navy from 1977-85 before retiring from the armed forces. He spent two years as a pilot for United Airlines before joining FedEx as a pilot in 1987, a position he held until he retired in 2014.

Walker is an exceptional marksman and was named the 2001 Tennessee State High Power Rifle Champion in the Master classification. In 2002, he earned the Distinguished Rifleman Badge, becoming just the 1,564th civilian to earn the badge since 1884. In addition to his excellence in shooting, Walker remained fit throughout his adult life by competing in numerous marathons and triathlons, including the 2004 and 2006 Ironman Triathlons in Florida.

Currently residing in nearby Franklin with his wife, Nancy, Walker can be seen at just about every Slippery Rock track and field or cross country function as he has continued to be an avid supporter of the program and volunteer at home events. The couple have one adult daughter, Haley.

The 1998 football team opened the year with a 39-10 loss on the road at Division I South Florida before reeling off a program record 12 wins a row. The Rock, led by George Mihalik, claimed the PSAC West and outright PSAC titles and rolled through No. 14 Grand Valley State and No. 13 Shepherd in the first two rounds of the NCAA playoffs to reach the national semifinals before falling to No. 3 Carson-Newman to finish with a 12-2 record. SRU, which ranked No. 5 in the final regular season rankings, got its biggest win of the season when it upset No. 2 Indiana (Pa.) midway through the year to stay in the driver's seat for the PSAC title. The Rock gave up less than 10 points in five different games that year and 14 or less points in nine games. No team in SRU history has reached as far in the NCAA playoffs as the 1998 team. The closest to do it was the 2015 team, which matched the school record for wins and also finished at 12-2, but lost in the NCAA quarterfinals.

The 1968 baseball team, led by Wally Rose, opened the year with a 2-1 loss on the road at West Virginia University in Morgantown before bouncing back to knock off the Mountaineers in the second game of the doubleheader. All they did after that was win 15 more games in a row to finish the year with 16 straight victories and a 16-1 overall record. They had six games rained out over the course of the year, and unfortunately, never got the chance to play in the postseason after not being selected for NCAA lower division play. Rose and three players from that team, Tom Stabile, Roger Flynn and Dick Hudson, are already enshrined in the Hall of Fame.