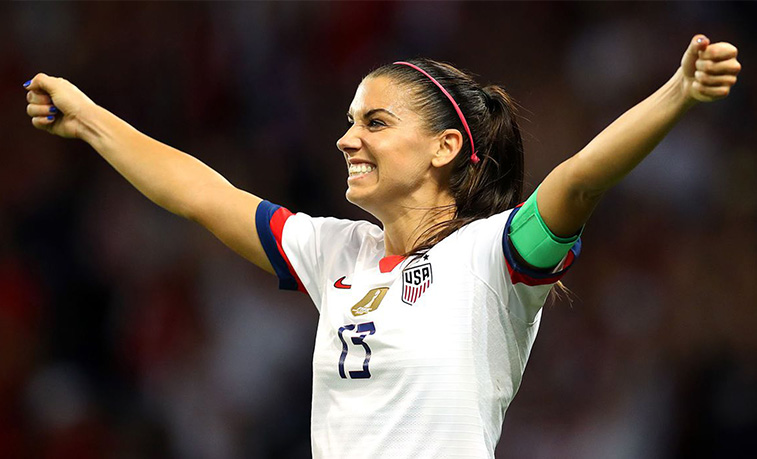 SLIPPERY ROCK, Pa. — Here's something that everyone at Slippery Rock University should get a kick out of. The University Program Board, a student-run organization that schedules concerts and other entertainment offerings on campus, will host Alex Morgan, co-captain of the U.S. women's national soccer team at 2 p.m., Sept. 22 in Morrow Field House.

Morgan, who also plays for the Orlando Pride in the National Women's Soccer League, is the reigning U.S. women's soccer player of the year. She was a member of the U.S. teams that won gold at the FIFA Women's World Cup tournaments in 2015 and 2019 as well as at the 2012 Olympic Games.

"Women's rights, her journey in professional sports and business and of course, winning the World Cup, are going to be the biggest topics at the event," said Celine Halt, a senior resort recreation and hospitality management major from Murrysville and president of UPB. "She is coming to speak about her time and accomplishments with the women's soccer team, but also about how she has been involved in fighting for equal pay for women in the sport."

Halt is excited for the discussion and with such a diverse set of topics, she hopes that all audience members will be able to take something away and learn something new.

"With Alex covering so many aspects of her career - whether its professional sports, being a businesswoman or an author - our hope is that everyone who attends will be able to relate to something she has said or done," said Halt.

Shortly after graduating early from the University of California, Berkeley, where she played for the Golden Bears, Morgan was drafted number one overall in the 2011 Women's Professional Soccer Draft by the Western New York Flash. It was with the Flash that she made her professional debut and helped the team win the league championship.

At the age of 22, Morgan was the youngest player on the U.S. national team roster at the 2011 FIFA Women's World Cup, helping the team to a silver medal. At the 2012 Summer Olympics, she scored the match-winning goal in the 123rd minute of a semifinal match against Canada. In doing so, she finished 2012 with 28 goals and 21 assists, joining Mia Hamm as the only American woman to score 20 goals and 20 assists in the same calendar year.

She is the sixth and youngest U.S. player to score 20 goals in a single season.