Slippery Rock University hired its first Frederick Douglass Institute scholars fellow, a position that was borne from a State System collaborative that provides teaching opportunities and other professional experiences to scholars while supporting the FDI mission to create inclusive university communities.

SLIPPERY ROCK, Pa. — Growing up on the South Side of Chicago, and later as a graduate student living in North Carolina, Clitha Mason had never heard of Slippery Rock University. But as she was pursuing teaching fellowships at institutions with a strong commitment to cultural studies, SRU not only popped up on Mason's radar but became a school with great appeal.

It turns out, both SRU and Mason are intrigued by what they can offer each other.

A Fayetteville, North Carolina, resident, Mason was among the dozen applicants from around the country that applied for a new temporary faculty position at the University through the Frederick Douglass Scholars Fellowship program, an initiative through Pennsylvania's State System of Higher Education and its Frederick Douglass Institute.

Mason was recently hired as SRU's first FDI scholars fellow for the 2020-21 academic year. As part of her one-year appointment, she will teach courses, help develop curriculum and support programming related to the FDI mission, which is to "create inclusive university communities and transformative connections among historically underrepresented students and faculty, as well as other communities across the Commonwealth and beyond."

"SRU has the most solid commitment to cultural studies, which is important to me," Mason said. "A lot of schools are rushing to incorporate cultural studies, but at SRU there's a program already in place, with the dedicated energy and time to developing this discipline and studies. That made SRU an easy pick."

Nine PASSHE schools now offer FDI scholar fellowships, which are funded by each university to provide teaching opportunities and other professional experiences to graduate students who are pursuing careers as university faculty and who are entering the final year of a terminal degree or doctoral programs. Applicants from diverse cultural backgrounds, especially those from historically underrepresented groups, are encouraged to apply. 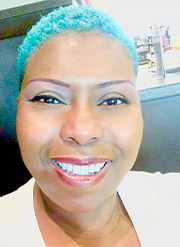 "Diversity is an essential part of the vision for our University," said Abbey Zink, provost and vice president for academic affairs. "It's important that we increase and enhance our diversity and inclusion efforts, not just because it's the right thing to do or something that we should do, but also from a curriculum and education standpoint. Having different cultural perspectives is important to offer our students and having greater diversity is something students want."

Mason is a doctoral candidate in the American cultural studies program at Bowling Green State University, and her teaching experience includes ethnic studies and Black popular culture, as well as women's, gender and sexuality studies. She has a master's degree in film studies from North Carolina State University and a bachelor's degree in business administration from Fayetteville State University. She's currently working on a dissertation in BGSU's doctoral program about the "Great Migration" of African Americans out of the racially segregated South in the early- to mid-20th century to industrial cities in the North, and the effects that migration had from 1982-2000. Mason is particularly focused on her hometown of Chicago, and the South Side community known as Bronzeville, which is a Black cultural center in the city.

"It's important to bring scholars in from different cultures when you're trying to teach people about other cultures," Mason said. "Especially in this salient time when we, as a nation and a people, are trying to move forward differently than how we've operated in the past. (Universities) want to offer opportunities for people to at least see someone who doesn't look like them and hear from a population that has a different perspective.

"Scholars of color and scholars from disenfranchised groups need opportunities in places where they might not typically think of themselves getting hired. It's not just adding diversity and having these people on campus, but actually including them in decision-making, strategic goals and giving them a voice in department meetings."

Ursula Payne, professor of dance and director of the FDI at SRU, was an integral part of adding an FDI scholar fellow at the University, a process that started last year but was delayed by the coronavirus pandemic.

"This demonstrates another level of commitment to diversity for the University and another step in the right direction," Payne said. "Clitha has such a wealth of knowledge and an interdisciplinary approach to what she can offer. We needed someone who can teach from a broad spectrum."

Mason will teach two classes in the spring 2021 semester in programs from SRU's Department of Nonprofit Management, Empowerment and Diversity Studies. She'll also have course-equivalent responsibilities as a guest instructor and supporting diversity initiatives and programs across campus. Mason has 15 years' experience working with two YMCA programs in Fayetteville, which will lend to her nonprofit management expertise in addition to her scholarly background in cultural and diversity studies.

Her lived experiences, as a single mother who was once homeless, will also inform her support of campus programs such as SRU's Women's Center.

More information about the FDI Teaching Scholars Fellowship is available on the FDI website.