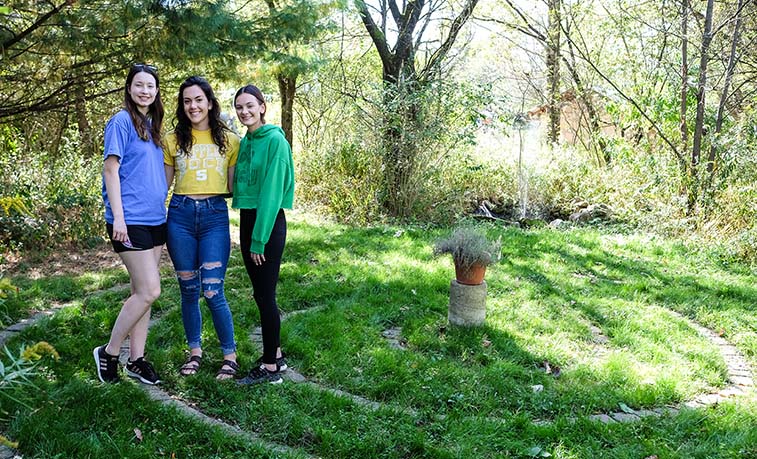 SLIPPERY ROCK, Pa. — Nature's restorative effects on the human brain is not a recent discovery. Many college students have cleared their minds by taking a walk outside before returning indoors to write a term paper or study for an exam. However, a collaborative research project at Slippery Rock University is using science to back up a nature-based wellness intervention known as ecotherapy.

"Ecotherapy has been around for a long time," said Jennifer Willford, associate professor of psychology. "(It's becoming more popular) as a reaction to our overly connected busy lives. People are burned out, tired and they want something to balance it out; they need methods that work, and ecotherapy works. The science is there to back it up."

Even before the internet increased the demand for people's attention, a practice called "shinrin-yoku" was studied in Japan in the 1980s as a form of preventive health care. Translated to "forest bathing" or "forest therapy," shinrin-yoku has gained traction by researchers and educators, particularly as a mindfulness practice. Shawn Davis, assistant professor of parks, conservation and recreational therapy, became interested in shinrin-yoku and other forms of ecotherapy after attending a presentation three years ago at a Pennsylvania Association of Environmental Educators conference.

"I said, 'Well that makes perfect sense,'" Davis said. "I always feel rejuvenated after taking a hike or spending time in the woods. The more I started reading about it and the intentionality behind it, I got more intrigued."

Davis, who is co-coordinator of educational programs at SRU's Robert A. Macoskey Center for Sustainable Systems Education and Research, helped secure funding through the University-sponsored President's Commission on Wellness to build an ecotherapy garden behind the Macoskey Center. The garden was installed in 2018 by Davis and Macoskey Center student workers led by Mickey Jury, a 2018 SRU graduate with a degree in psychology. It includes a fountain and a 15-foot wide spiral pattern of steppingstones modeled after a monastic design used for meditation.

Davis led a forest therapy workshop at the Macoskey Center last May, intentionally scheduled as a stress-relieving activity during the week of final exams. The workshop included a guided hike with "invitations" to use forest therapy breathing and observation techniques. 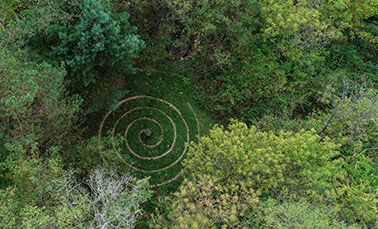 Mia Radevski, a 2019 SRU graduate with a degree in psychology, started her senior capstone research project last year using the ecotherapy garden to test the restorative effects nature has on people's cognitive functions. While no participants were tested last year because of weather and Radevski has since graduated, another group of SRU students, advised by Willford, are picking up the trail of research this year.

"The research is based on the attention restoration theory with the idea that nature has the capacity to renew our attention after we've exerted some type of mental energy," Willford said. "The theory is based on attention, so our twist on the research is that we are looking at the working memory component, which is another domain of cognitive function."

Rather than testing how well people can simply pay attention and be in the moment after spending time in nature, the SRU research team is examining how exposure to nature can help people's memory.

"We'll bring in college students and have them engage in a task where we try to wear them out cognitively," said Megan Gresgott, a senior psychology major from Slippery Rock. "Then we'll either expose them to the ecotherapy garden or have a control group and look at the impact of that exposure to restoring their working memory capacity."

The participants, who will be recruited from select SRU liberal studies classes, will be given a set of numbers to remember and be asked to recall them after taking a 10-minute survey about sustainability. This will establish their baseline working memory. Then they will repeat the process with a new set of numbers and a second survey, but then be randomly selected to either spend 10 minutes in the ecotherapy garden or stay inside the Macoskey Center before taking the second memory test.

"The idea is that if you are mentally fatigued, then spending time in nature could be a method for restoring that function," Willford said. "There are some characteristics of nature that we think are important for this restoration. The stimuli in nature tend to be soft and captivating; it's not in your face. That's important. It is an opportunity to feel a release from your responsibilities when you are in nature, and being in nature is going to involve the rewards circuit in the brain. Those feelings of pleasure and release from responsibilities and stress are going to work together to enhance restore cognitive functions."

"With all the distractions we have on our phones and laptops, it's good to get away from all of that and be in nature," Gresgott said. "Ecotherapy can be useful for a lot of things, such as a studying tactic or a mindfulness method if you just want to clear your mind."

Willford also sees the benefits of undergraduate research that her students are receiving through this study, which could result in them publishing the research in a journal or presenting it at a conference.

"Undergraduate research is a high-impact learning practice that has all kinds of benefits, from thinking critically and problem solving to the mentoring relationships that they have with their professors," Willford said. "They also develop communication skills and it's experience they use to build their resumes."