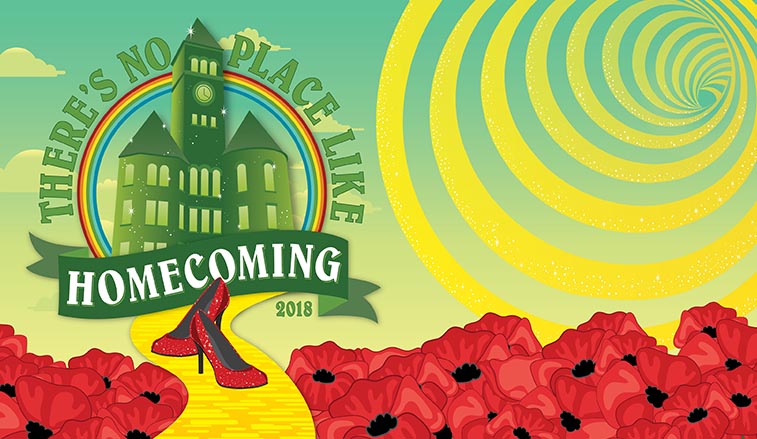 SLIPPERY ROCK, Pa. - Chances are that you won't find Dorothy and Toto anywhere near Slippery Rock University Oct. 9-14, but then again, would anyone associated with The Rock really need the legendary "Wizard of Oz" characters to tell them that there's "No Place Like Homecoming" at SRU?

The Offices of Alumni Engagement and Student Engagement and Leadership, charged with heading up the October Homecoming and Reunion Weekend, certainly don't think so.

"Last April, we offered a trio of themes to faculty, staff and students to vote on for this year's event," said Lauren Moran, director of student engagement and leadership. "We had hundreds of responses and it was great to have all the constituencies - faculty, staff and students - heard from in selecting our theme. And let's be honest, there really is no place like Slippery Rock at homecoming, or any other time for that matter, is there?"

And, with the number of activities jammed into the weeklong celebration, who could argue?

In addition to traditional homecoming favorites such as the parade, tailgating tents, fireworks, the naming of homecoming royalty, a dinner honoring the Class of 1968 and the crown jewel of the weekend - Rock football versus Edinboro at 2 p.m. at Mihalik-Thompson Stadium - a number of events introduced in 2017 will be returning due to popular demand.

Included among those events are:
• Spirit Board Painting: 3-6 p.m., Oct. 9. Student clubs and organizations will paint SRU-themed and homecoming messages on 3' x 4' boards that will be displayed in the Quad throughout the entire week. A panel of staff and faculty will judge the entries with the top three vote earners winning prizes.
• Operation GLOW: 7-10:30 p.m., Oct. 11. This fun event that begins and ends at the Mihalik-Thompson Stadium Parking Lot, starts with a 2.018-mile "glow" run/walk where participants will collect glow sticks and glow paint along the route with which to "decorate" themselves. At the conclusion of the run, a "glow" party complete with a DJ and laser light show awaits.
• "Rock the Block" Tailgate Festival: 11 a.m. to 2 p.m., Oct. 13 in the Mihalik-Thompson Stadium parking lot. This event is geared toward getting the crowd primed for game time with carnival games, food, prizes and giveaways and an outdoor stage featuring live music from "Radio Tokyo," an '80s, '90s and 2000s cover band. New this year is a mechanical bull for those brave souls wanting to channel their inner cow person.

The hashtag, #sruHOCO18, has been created for use on social media posts to help promote the event.

"We had a quality program last year and that will, as well attended as the events were last year, hopefully generate buzz going into this year and drive even more people to get involved and experience what we're offering and become a part of it all," said Moran.

Homecoming events begin Oct. 9 with "Paint the Town." Students will paint the windows of downtown Slippery Rock businesses on Main Street with colorful designs to welcome alumni home; and will continue through "Polish the Rock" at noon, Oct. 14. In between, more than 40 events will be staged to engage and excite the SRU faithful.

The big contest of the day - Rock football versus Edinboro University - will kick off at 2 p.m. at Mihalik-Thompson Stadium and will be televised on the Rock Athletics Digital Network, which is available at www.rockathletics.com/watch.

SRU's homecoming royalty will be introduced during halftime. "The Homecoming Steering Committee is very excited that we're seeing our homecoming court process really evolve this year," said Moran. "We've eliminated the gendered titles of king and queen as well as the numbered ratio of male to female representation on the court.

"It's an effort to further embrace diversity and gender inclusivity within the campus community, 10 candidates will be chosen through the Homecoming Royalty election process to represent the SRU community regardless of their gender, gender identity and gender expression."

Following the football game, a 5th quarter reunion alumni party will be offered from 4:30-6 p.m. at the Smith Student Center. Cost is $10 per person. Advance registration is requested but not required.

The Class of 1968 and Golden Grad Club members will gather for dinner at 6 p.m. in the Alumni House. A homecoming dance party hosted by the Black Action Society will round out the day's event from 10 p.m. to 1 a.m. in the Smith Student Center Ballroom.

The weekend will conclude Oct. 14 with "Polish the Rock" at noon along Main Street in downtown Slippery Rock; two showings of "Skyscraper" staring Duane "The Rock" Johnson at 4 p.m. and 8 p.m. in the Smith Student Center Theater; and a soccer double-header that begins at 2 p.m. as the SRU women's team will take the field, before giving way to the men's team at 4 p.m. Both games will be at Egli Field against California University of Pennsylvania.

"The students and alumni really embraced everything about homecoming last year and made it an incredible event," said Kelly Bailey, director of alumni engagement. "From those that were part of the homecoming committee to those that were event attendees, the buy-in and enthusiasm was incredible and fun to watch. The all-around energy in both event creation and participation was fantastic. The whole thing just radiated around the campus."

For a complete list of all Homecoming and Reunion Weekend events, visit: http://www.rockalumnievents.com/homecoming.html.