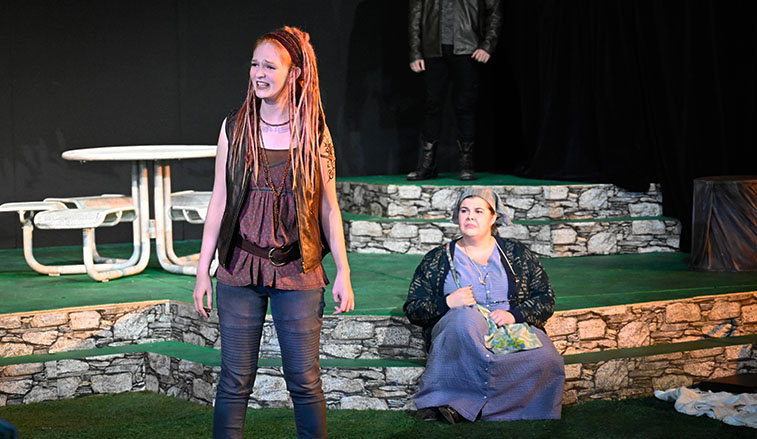 SLIPPERY ROCK, Pa. — Slippery Rock University Theatre will bring the spirit of revenge to its season-opening production, "Medea in Methland." Performances are at 7:30 p.m., Oct. 11-12 and 15-17 and 2 p.m. Oct. 13. All performances are in the University Union Multipurpose Room.

Written by David Skeele, SRU professor of theatre, "Medea in Methland" is inspired by the Greek tragedy, "Medea," by Euripides in 431 B.C. Skeele's update is a story of betrayal and revenge, set in an isolated holler in contemporary Appalachia, where meth lord Jason rules with an iron fist. When he tries to exile his wife, Medea, and replace her with the daughter of a mafia don, he ignites a vengeful fury that threatens the destruction of his entire world.

Skeele said that the production is a hybrid of a concert and play with a live band built into the performance. Musicians taking part in the performances are members of the western Pennsylvanian bluegrass band, Well Strung, known for its "traditional yet progressive bluegrass music."

"It's a unique collaborative effort between our talented theatrical performers and the band," said Skeele. "The combination will offer audiences an immersive, exciting experience in a drama of Greek proportions."

Skeele said that through this original adaptation, he hopes audiences will be able to fully explore and understand the controversies associated with Medea's world, from murder to the endless cycles of revenge that are a common theme in Greek tragedies.

Skeele said he enjoyed the freedom of diverting from Euripides' original plot points in creating his adaptation.

"Writing this new version was challenging, but one of the reasons I have really enjoyed creating my adaptation is having this archetypal skeleton of a plot that's almost so well known that feels like it's a part of our DNA," he said.

"There's something that just feels so elemental about these stories, but at the same time, because it's clearly an adaptation, I feel a great freedom to explore areas of the original story that weren't explored before. I think this version of 'Medea' is more sympathetic to the main character with some different angles included to explain who she is that the original didn't provide."

Tickets are $14 for general admission and $12 for SRU students. A "Community Night" admission of $12 for all attendees is scheduled for the Oct. 12 performance.

Tickets will be available at the University Union Box Office one hour prior to showtime.

This production is recommended for mature audiences only.