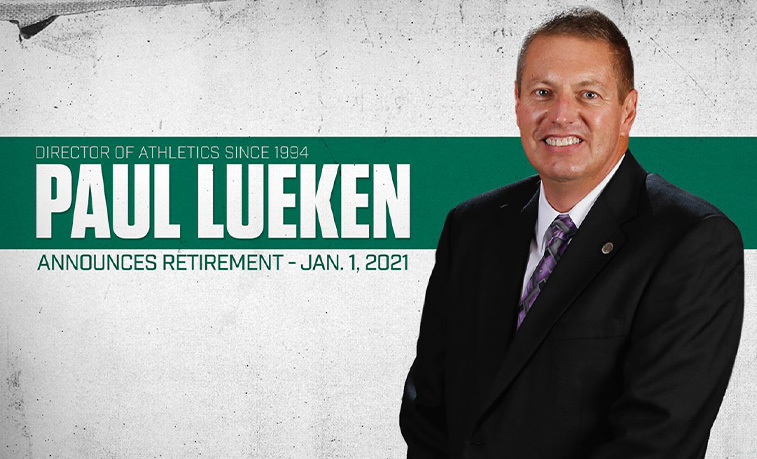 SLIPPERY ROCK, Pa. — After more than 26 years leading the Slippery Rock University Athletic Department, Paul Lueken announced today, Oct. 15, that he will retire from his position as director of athletics at the end of the calendar year.

Lueken will officially step away from his position Jan. 1, 2021. Joanne Leight, chair of SRU's Physical Education Department and current faculty athletic representative, will serve as the interim athletic director. A national search will take place in early 2021 to identify the next athletic director, who will assume the position prior to the fall 2021 semester.

"I am extremely proud to have served as director of athletics at SRU for more than 26 years, assisting our great student-athletes and coaches in achieving tremendous success in the classroom and on the playing fields," said Lueken. "I hope folks will remember me as someone who loved the experience of working with student-athletes and coaches to achieve many goals, and as someone who helped transform SRU Athletics into a top NCAA Division II program. It has always been my intention to improve Rock Athletics through strategic actions and help our teams succeed into the future."

A 1983 graduate of Indiana's Earlham College, Lueken earned a master's degree in sports administration from St. Thomas University in Florida in 1985. He joined the SRU Athletic Department in 1994 after serving as an assistant athletic director and head golf coach at Eastern Illinois University for four years.

"Paul has been an outstanding representative of this institution, and we are grateful to him for his incredible run and years of service," said William Behre, SRU president. "The University truly values all the work he's done for our institution, athletics and especially our student-athletes.

"Paul did a great job of not micromanaging while at the same time having his finger on the pulse of the department. He wasn't nearly as concerned about why you were running a particular scheme as he was about making sure you knew the recruiting rules. His leadership and direction have provided a stable and clarifying vision for our programs that have resulted in both academic and athletic excellence."

One of the high points of that athletic excellence for SRU came during the 2007-08 academic year, when The Rock won the Pennsylvania State Athletic Conference's Dixon Trophy, presented to the top overall athletic department in the league. While that year marked the only Dixon Trophy win in school history, SRU has routinely placed in the top third of the Dixon Trophy standings each year.

"In terms of athletic success, I will always be proud of our run to win the Dixon Trophy in 2008 and also that we were able to maintain our position toward the top of the standings ever since," said Lueken. "That speaks to the overall stability of all of our teams and our athletic department." 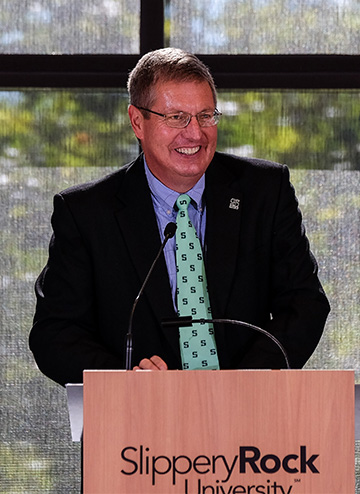 While winning the Dixon Trophy was an impressive feat, it is far from the lone athletic accomplishment at SRU under Lueken's leadership. Since he took over the Athletic Department in 1994, SRU has won 39 PSAC championships and had 11 individual student-athletes win a national title.

Among the top team accomplishments under Lueken are eight appearances in the NCAA Division II Football Playoffs, including two trips to the national semifinals with the most recent coming in 2019 when SRU earned the right to host the semifinals. The track and field programs have also shined during Lueken's tenure, winning a combined 19 PSAC titles between the men and women. In total, 11 different SRU teams have won at least one PSAC title during Lueken's tenure with women's teams claiming 21 titles and men's teams picking up 18.

The athletic success can be traced to a number of positive moves made under Lueken, from the hiring of quality coaches to the creation and significant enhancements to athletic facilities. Perhaps the most significant piece of The Rock's athletic success came from Lueken's fundraising and advocating for additional scholarship money for student-athletes. When he took over in 1994, the total athletic scholarship fund was slightly more than $300,000 annually. When he retires in January, it will be more than $1.1 million.

The success in competition isn't the only legacy Lueken will leave, as SRU's campus looks significantly different now than it did in 1994. Under Lueken, numerous facilities were constructed and all of SRU's athletic facilities underwent major upgrades. The creation of new facilities during his tenure included the field hockey and lacrosse locker rooms, training room and offices at Mihalik-Thompson Stadium and the women's soccer and softball locker rooms and offices at the SRU Softball Complex. While all of the facilities at SRU have received significant upgrades, the most impressive upgrade came with the construction of, and recent enhancement to, Jack Critchfield Park, home of SRU's baseball team.

Those facility upgrades also gave SRU another way to connect with Butler County and the surrounding community and became a significant source of revenue generation for the athletic department. The University routinely hosts PIAA, WPIAL and District 10 high school playoff events, in addition to cheerleading regional tournaments, youth soccer tournaments and other camps and clinics.

To get even more involved in making sure SRU athletics had a significant place in the Butler County community, Lueken volunteered to serve on the Butler County Tourism Board, recently completing a six-year run as the organization's treasurer.

"I really enjoyed staying connected to our community and working with the folks at Butler County Tourism helped me do that," said Lueken. "The best part of living here and working at SRU is the people, and being able to interact with so many of those folks through our place in the community was a highlight of the job for me."

While the athletic accomplishments, facility upgrades and enhanced role for the athletic department are all positives for the University, Lueken is most proud of the tremendous academic success of The Rock's student-athletes.

During his tenure, SRU has ranked at or near the top of all PSAC schools in academic success. A total of 11 SRU student-athletes have been named the PSAC Pete Nevins Scholar-Athlete of Year during his tenure, while 69 SRU student-athletes have been named to PSAC Top 10 teams. That number is just two shy of Shippensburg (71) for the most in the PSAC. Since 1994, SRU has had a total of 75 student-athletes named to CoSIDA Academic All-America honors and The Rock leads all schools in the Atlantic Region and rank sixth nationally in that category.

"All of the success in competition is nice," said Lueken. "But, at the end of the day the thing I am most proud of is the academic success of our student-athletes. To be able to watch our student-athletes become some of the top academic students on campus and to see them leave here and go on to exceptional careers has been the most rewarding piece for me."

While Lueken will be retiring from the University in January, he plans to stay connected to Division II athletics and to SRU by taking on a consulting role with the PSAC, where he will help out with championship events and other administrative tasks. This role will also allow Lueken to continue to serve as a member of the NCAA Division II National Football Committee.

"I will miss the daily interaction with our student-athletes, staff and coaches," said Lueken. "But I plan to continue to live in the area and will always be cheering on our Rock teams."