SRU theatre department prepares for first performance of the year 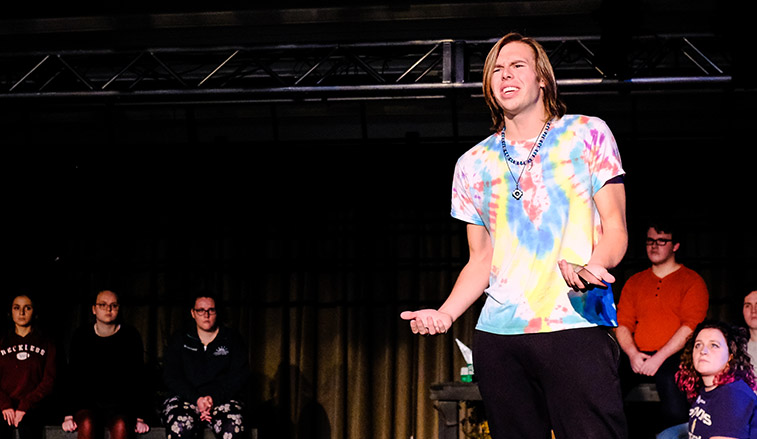 SLIPPERY ROCK, Pa. - Although the cool temperatures might tempt you to want to do nothing but settle on the couch with a blanket and binge watch Netflix - don't do it. Instead, grab a ticket for the Slippery Rock University Theatre Department's production of "Concord Floral."

"Concord Floral" is a play written by Jordan Tannahill, an author, playwright, filmmaker, and theatre director from Ottawa, Ontario. It is based on "The Decameron," a collection of novellas by 14th-century Italian author Giovanni Boccaccio. The book was structured as a frame story containing 100 tales told by a group of seven young women and three young men sheltering in a secluded villa just outside Florence to escape the Black Death, which was affecting the city.

The play takes place in an abandoned, one-million-square-foot greenhouse and serves as a refuge for 10 high school students. When a dead body is discovered, the play explores how the group deals with the chain of events that leads them to a secret that no one wishes to acknowledge.

Laura Smiley, SRU associate professor of theatre and director of the play, discovered the piece while on a two-month sabbatical in Canada. "I had said as a part of my sabbatical that I was going to bring back a piece of new, Canadian contemporary work and this spoke to me," Smiley said.

"When I choose plays, I want them to be something relevant to the University community. Something that the students can relate to and something that would make them think."

Smiley said that as the play is meant to be set in a local community using references and experiences from relatable teenagers and community activities, she took the liberty of moving the play's setting from Toronto, Ontario to Pittsburgh.

"It's really a coming of age story that's also a bit of a murder mystery with something urgent that needs to be reckoned with and some really high personal stakes as everyone kind of has a secret to hide," she said.

Admission is $12 for the general public and $10 for SRU students. Community members will be offered reduced admission of $10 per ticket for the lone Saturday evening performances.

Tickets are available at the Smith Student Center Information Desk, the Theatre Department box office inside the University Union.