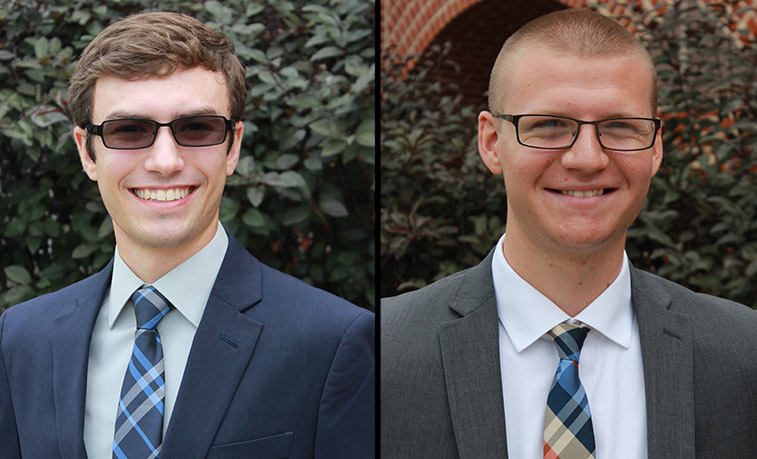 HARRISBURG, Pa. — Michael Shimmel, a Slippery Rock University senior political science major from Philipsburg, and Janco Swart, an SRU senior political science major from Oil City, have been selected to participate in the prestigious The Harrisburg Internship Semester program. THIS provides students the opportunity to work in all areas of state government while earning a full semester's worth of credits. Students also receive a $3500 stipend to assist with living expenses while they reside in the Harrisburg area. THIS invites students from each of the State System universities to participate.

Shimmel is working in the office of state Rep. Michael Sturla, D-Lancaster County, as part of the 15-week internship sponsored by Pennsylvania's State System of Higher Education. He is the son of Mike and Laura Shimmel, and is a 2016 graduate of Philipsburg Osceola Area High School.

Swart is interning in the Center for Rural Pennsylvania, a bipartisan agency of the state Legislature. He is the son of Jannie and Mari Swart, and is a 2015 graduate of Cranberry Junior/Senior High School.

Shimmel and Swart, along with nine other students participating in the program, will also attend several academic seminars during their fall semester internship. Each of the students will complete an individualized research project as part of the program's requirements.

"A critical part of the State System's mission is to prepare students to be leaders in their communities and the Commonwealth," State System Chancellor Dan Greenstein said. "Students who participate in THIS receive an unforgettable experience, making a direct contribution to workings of state government. I hope in the course of this semester these 11 students have the opportunity to learn how in the future they can contribute to Pennsylvania's success."

State System students interested in participating in THIS in a future semester may obtain information on the program by calling the Dixon University Center at 717.720.4089.