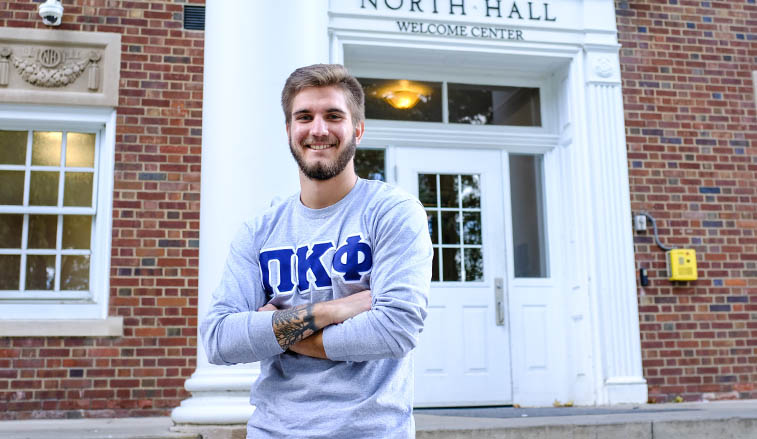 Robert Bailey, a Slippery Rock University junior accounting major from Mount Pleasant and president of Pi Kappa Phi fraternity's SRU chapter, has been selected as one of just 100 cyclists - from a nationwide field of more than 10,000 of his fraternity brothers - to participate in the 2019 Ability Experience's Journey of Hope.

SLIPPERY ROCK, Pa. - With the fall semester in full swing and the holiday season right around the corner, it's only natural for a student to start making plans for ... summer? Well, if you're Robert Bailey, it's never too early to get a jump, or rather a peddle, on your plans.

Bailey, a Slippery Rock University junior accounting major from Mount Pleasant and president of Pi Kappa Phi fraternity's SRU chapter, has been selected as one of just 100 cyclists - from a nationwide field of more than 10,000 of his fraternity brothers - to participate in the 2019 Ability Experience's Journey of Hope.

The Ability Experience, a 501 (c )(3) nonprofit organization, was founded in 1977 and remains the exclusive philanthropy of Pi Kappa Phi with the purpose of instilling lifelong service in fraternity members and serving people with disabilities. The goals of the organization are to change the dialogue on disability and to champion the abilities of all.

One way of accomplishing that goal is through the Journey of Hope.

In 1987, a young Pi Kappa Phi alumnus, Bruce Rogers, embarked on a daunting journey of cycling across the country in an effort to bring more attention to the mission of The Ability Experience. Inspired by his inaugural trip, a 21-person team rode the first official Journey of Hope in 1988. Now, every summer, members of Pi Kappa Phi cycle from Los Angeles, San Francisco and Seattle to Washington, D.C. while delivering a message of understanding.

The cross-country journey is a prestigious opportunity in which only 1 percent of the fraternity's active members get to participate.

"This year marks 30 years of Journey of Hope and throughout that time, a little more than 2,000 members have gone on this trip and raised more than $12 million for the Ability Experience," said Bailey.

Before embarking on the journey, each cyclist must meet a fundraising goal of $6,000, accomplished through a series of events created and conducted by their respective Pi Kappa Phi chapter.

The 12-week journey will cover 32 states and more than 12,000 miles. Cyclists will begin the ride from either Seattle, Washington or one of two California locations, Long Beach or San Francisco, with Washington, D.C. the final destination.

Along the way, participants will stop at "Friendship Camps" where they will be able to engage with campers who have disabilities through sports and craft activities. "We're just looking to dedicate our time to service throughout the entire summer," Bailey said.

Each year, cyclists are selected to participate in the event through a rigorous application process that includes an in-depth review of each applicants leadership qualities, leadership positions, involvement on campus, GPA and letters of recommendation. A phone interview with the Ability Experience's regional director is also conducted where candidates are asked why they want to participate; what they expect to come away with from the experience; and how they will handle the commitment to the event.

"I had never applied before but did so after attending an info session at our national conference," said Bailey. "I have a 4.0 GPA, am the president of my chapter, am the vice president of finance for IFC on campus and play on the men's soccer team so I believe all those activities and responsibilities certainly helped my application along, as well as wanting to do this for the right reasons.

"Pi Kappa Phi is the only fraternity to establish and maintain its own nonprofit organization. It's an honor to give my time to service and raise money and awareness for The Ability Experience. Seeing the impact and the smiles our teams will make over this trip will mean the world to me."

Bailey will be the second SRU Pi Kappa Phi member to take the journey. Mike Semach, a 2015 SRU graduate, participated in the 2013 event.