SLIPPERY ROCK, Pa. - Pennsylvania Governor Tom Wolf has appointed Joshua Young, a Caln Township commissioner and 2004 graduate of Slippery Rock University with a bachelor's degree in political science, to a seat on the University's council of trustees.

It is the second appointment to the council for Young, who was first appointed by former Governor Ed Rendell March 2007 at the age of 25. He was elected chair of the trustees in 2010 - becoming the youngest chair in Pennsylvania's State System of Higher Education - and again in 2011. 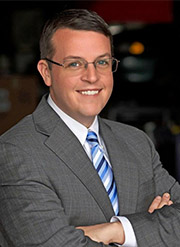 "SRU is known as one of the premiere schools in the state and to be able to help further that legacy and make sure that our University continues to be able to offer access to a quality education at an affordable price to all students is important to me.

"I can't wait to get back to campus, see the progress and interact with the students again. I'm ready to get to work."

In 2005, Young ran for his first term on the Caln Township board of commissioners as a Democrat, winning by 10 votes, becoming the youngest ever member of their board at age 23.

Young, who resides in Caln Township and is a full-time mechanic, assists in the operation of his family's auto repair and towing company, Young's Garage, in West Chester.