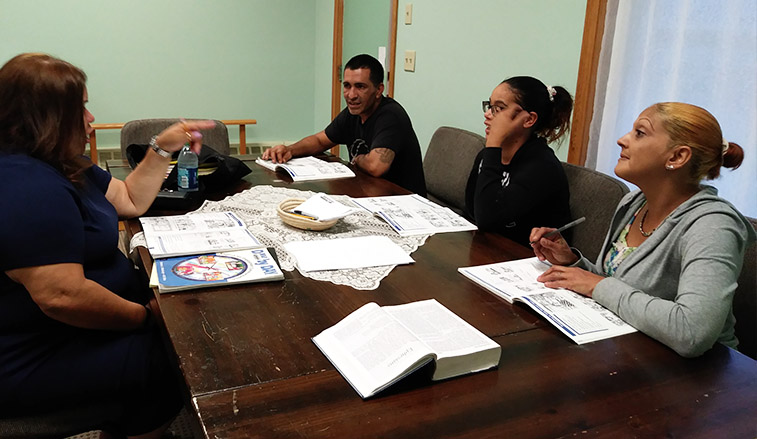 Hurricane refugees from Puerto Rico, who relocated to Lawrence County, are enrolled in English as a second language classes in New Castle thanks to a partnership between the United Way and Slippery Rock University.

SLIPPERY ROCK, Pa. - Hurricane Maria, regarded as the worst natural disaster on record to affect Dominica and Puerto Rico, displaced tens of thousands of residents, forcing many to relocate to the United States to begin life anew. Many of the refugees from Puerto Rico that relocated to western Pennsylvania have needs that go beyond what some local agencies and volunteer groups can offer, so Slippery Rock University is stepping up to fill an urgent void: language skills.

Through a partnership with the United Way of Lawrence County, SRU's Language Center is training an English as a second language instructor and providing curriculum tailored for English-learning job seekers to ease the transition of Puerto Ricans who relocated to New Castle.

"This is a good opportunity and it's an example of the University's mission to respond to the education needs of the community which it serves," said Seungku "Steve" Park, director of the SRU Language Center, which offers ESL classes to help international students matriculate to SRU, and also works with community agencies like the UW.

Park was recommended to Gayle Young, executive director of the United Way of Lawrence County, earlier this year by a case worker for the Pennsylvania Department of Human Services who notified Young about a need in New Castle, where more than 40 Puerto Rican families moved from relief shelters after becoming eligible for housing vouchers from the U.S. Department of Housing and Urban Development.

"New Castle has never had such a sudden influx of a cultural group," Park said. "(The refugees) are U.S. citizens but their culture is different from mainland U.S. and they speak Spanish. New Castle was not ready for them in terms of language services compared to bigger cities."

The DHS case worker assigned to the refugees, Maria Delgado, happened to be a native of Puerto Rico and bilingual, but needed training to teach the refugees English, particularly for vocational purposes. The United Way contracted SRU for $8,920 to compensate and train Delgado and provide "English for Employment Communication" curriculum.

"The curriculum that SRU offers is phenomenal," Young said. "When we were putting it together we wanted to make sure it would be comfortable and meet the families' needs."

Despite the convenience of offering the class in the evenings at Trinity Episcopal Church in New Castle, Young describes the class as "intensive," with 20 participants meeting four days a week, from Sept. 4 to Nov. 15, for two hours each night.

"Steve is wonderful," Young said. "He's been a ray of sunshine and he's been guiding us through this process. He's worked with ESL communities and he understands what they are lacking and areas where they can improve to really get them engaged. His experience has been priceless for us."

Young also credits community members, including church groups and elected officials, for rallying to support the Puerto Rican families with basic needs, but the specialized language training was something that other agencies could only offer with smaller-scale, one-on-one training.

"SRU became a partner as soon as we reached out and found that there was someone who could do this," said Young. "We'd love to continue this program." The program has already provided dividends Young said as a few of the program's participants have already found work after enrolling in the program.

Young said there are plans to secure grants to continue the program in the spring.