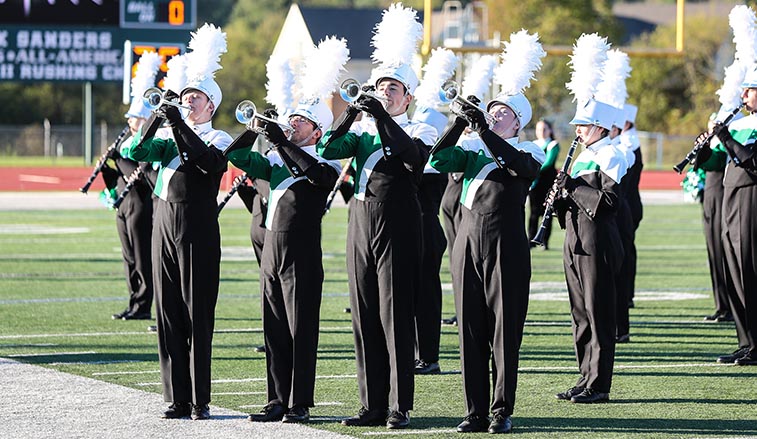 Slippery Rock University Marching Pride’s performance at the 2019 St. Patrick’s Day Parade in Dublin, Ireland, is more than four months away but preparation has already begun with rehearsals starting later this month.

SLIPPERY ROCK, Pa. -Slippery Rock University's marching band, The Marching Pride, is ratcheting up preparations and fundraising to take part in the 2019 St. Patrick's Day Festival in Dublin, Ireland. The band was invited to make the March 14-21 trip by Brendan Carr, Lord Mayor of Dublin.

"They're not only going to experience a new culture, they're going to represent Slippery Rock, the University, the state of Pennsylvania and the United States of America on an international stage," said Jonathan Helmick, assistant professor of music and director of bands, whose eyes widened as big as the bell of a tuba. "That's huge!"

With only four months until show time, the band has lots to do. Last week they met with members of SRU's Office for Global Engagement to ask questions about everything from passports to cell phone plans. Organizers also finalized the $435,000 contract with Atlantic Group Tours. Offset by fundraising and money the University budgeted for the trip, each student's out-of-pocket expense will be less than $3,500.

"I already know it's going to be one of the best parts of my college career," said Mikayla Ridgeway, a sophomore early childhood-special education major from South Park, who is one of the band's three drum majors. "I come from an Irish family so I'm very excited to go, and this is about as big as you can get in terms of parades."

Bands from all over the world will march the nearly two-mile long parade route through the streets of Dublin in front of an estimated 500,000 spectators.

"It's non-stop and competitive," Ridgeway said. "That's a long distance to march so we're starting to prepare for the physical challenges of the route."

While the band will have its first official rehearsal for the parade later this month, Helmick said the preparation for the St. Patrick's Day performance will ramp up in the spring semester, with four hours of dedicated rehearsing per week and students returning to campus early from winter break and spring break to squeeze in more practice.

"The style of marching (for this event) is different than what the students are used to," said Helmick, who noted that field marching with a drum corps, or "corps style," is what the band is used to performing at halftime shows during football season. "Parade marching is very different. You have to think about gate turns and dressing lines in different ways."

Helmick said the Pride will reveal a new parade performance for the event that will be much different than what they would do for a typical homecoming or community parade.

In the meantime, organizers will focus on fundraising and determining what other activities they will do while in Ireland, in addition to the St. Patrick's Festival, March 17, and the 49th Limerick International Band Championship, March 18, also a competitive parade featuring more than 1,300 musicians.

"We worked with AGT to find some events and locations that the students would be interested in or familiar with, and some of the landmarks around the country," Helmick said. "I also consulted people who have gone previously and looked at their itineraries and chose strategically to give our students a unique experience."

Though the complete itinerary has not been revealed to the students, as plans will be finalized later this month, Helmick was able to share they will visit such destinations as Trinity College, St. Patrick's Cathedral, The Cliffs of Moher and Bunratty Castle, where William Penn, the founder of Pennsylvania, once lived as a child.

The cost of the trip is slightly higher than a typical faculty-led study abroad program. Beyond airfare, hotel and bus transportation, equipment rental is also part of the package offered by AGT, which provides some of the larger, percussion instruments to the group.

"That's why their company is so unique," Helmick said. "They have decades of experience working with bands going to these type of events. But the cost is no small feat for these students, and for many, this is going to be their first time traveling internationally."

While the Marching Pride is busy conducting fundraising drives, such as selling hoagies and Con Yeager spices, donations are being accepted through the SRU Foundation by clicking here and typing "Band Ireland" in the "Other" designation field.