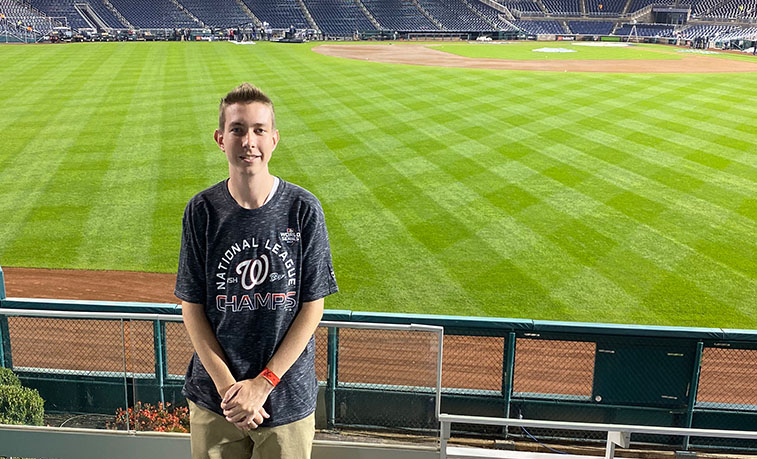 SLIPPERY ROCK, Pa. — Slippery Rock University was represented both on the field and off at last week's World Series. In the dugout of the champion Washington Nationals was former SRU student-athlete Matt Adams; in the Nationals Team Shop was current SRU student Hunter Malseed, a sophomore sport management major from Harrisburg.

"It was a dream to be at the World Series," Malseed said. "Even though I couldn't watch the games and it was a lot of work, it was an amazing experience and a lot of fun just to be in that atmosphere with all the baseball fans."

Malseed has worked a seasonal, part-time job in the Harrisburg Senators team shop the last five years. The Senators are a minor-league affiliate of the Nationals. When the parent club advanced to the Fall Classic, Malseed offered his assistance by contacting Steve Hamling, the Nationals' general manager of retail.

"I knew it would be busy because it was the World Series and it was the team's first trip," said Malseed. "Steve said he would love the help."

Team shop staff are stretched thin during the World Series because of the volume of limited edition products that must be unpacked and displayed on the shop floor immediately, including baseballs, T-shirts and other souvenirs that are sold only during the three-game homestand. Malseed worked as a sales associate, helping customers, unpacking shipments, stocking shelves and operating the cash register.

"The demand seemed like it was too high for what we were supplying," Malseed said. "We ran out of official baseballs by the second game. The response by fans was incredible."

Malseed volunteered for 42 hours during those three games, working from noon to 2 a.m. The experience left him with a better appreciation for the fast-paced environment of professional sports.

"Everything we talk about in class (in terms of operational speed); they are not kidding," Malseed said. "Nobody stops (running around the stadium on game day)."

Malseed was excused from his Leadership in Athletics class to attend the Oct. 25 game.

"It is certainly a unique experience and probably a once-in-a-lifetime opportunity," said Robertha Abney, associate professor of sport management, who teaches the class. "The World Series is at the top level as far as major sporting events, and it's great for (Hunter) to have the exposure of the behind-the-scenes work at that level. He is a hard worker and I saw that with his correspondence (with his supervisors at the Senators). He's very responsible and they really were pleased with his performance."

Between games, Malseed slept in an RV parked outside the home of his coworker's cousin in nearby Arlington, Virginia. Malseed hopes his experience will someday serve as an origin story for what he hopes is a long career in sports.

"Taking part in this helps me get my foot in the door," said Malseed. "After those three days, (Hamling) said he'd love to have us back and he'd make us sound like superheroes in a reference. It was an adventure and if it helps to keep me working in sports in some capacity down the road, all the better."