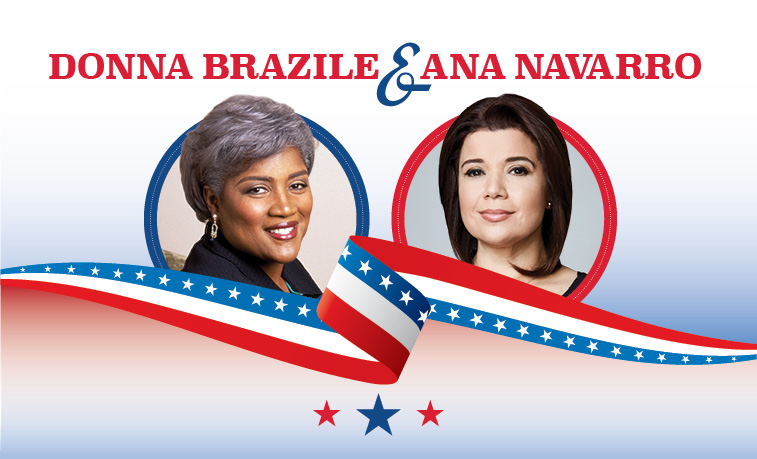 Brazile and Navarro will bring their political clout, unparalleled insights from the world of politics, and candid stories from behind the scenes to deliver an entertaining and practical talk about today's hottest political topics. Despite being from opposing parties, these pundits have joined forces to give audiences the latest in geopolitics, election forecasting and much more.

The event is free and tickets are not required.

"Having these two accomplished women who understand the world of politics and campaigning at SRU is amazing," said Heather Frederick, SRU associate professor of political science who will moderate the event. "It would be tremendous for just one of them to speak on our campus, but having both of them provides an additional dimension of political discourse.

"With the events currently taking place in American and global politics, they can provide different ideological perspectives of these events, contextualize them and provide expert insight into the future of what may happen as a result. I am especially looking forward to discussing with them the President Trump impeachment inquiry, the 2020 presidential election and their forecasts for outcomes and ramifications of the results of these events."

Brazile is an adjunct professor, syndicated columnist, television political commentator, vice chair of voter registration and participation at the Democratic National Committee, former interim National Chair of the DNC, and the former chair of the DNC's Voting Rights Institute.

The 2018-19 Gwendolyn S. and Colbert I. King Endowed Chair at Howard University is the author of "Hacks: The Inside Story of the Break-Ins and Breakdown That Put Donald Trump in the White House" and co-author of the forthcoming book, "For Colored Girls Who Have Considered Politics."

Brazile began her political career at the age of nine when she worked to elect a candidate who had promised to build a playground in her neighborhood. She has since worked on every presidential campaign from 1976 through 2000, when she served as campaign manager for former Vice President Al Gore, and in doing so, became the first African American woman to manage a presidential campaign.

Navarro is a well-known Republican strategist; political analyst for CNN, CNN en Español, ABC News and Telemundo; and political contributor to ABC's "The View." The Miami New Times named her a "Republican power-consultant" and the Tampa Bay Times called her "a sought-after voice in Republican politics and an adviser for any presidential hopeful."

"I have been at SRU for 15 years and this is the most significant political speaking engagement we have had," Frederick said. "I am honored to be able to moderate this event and hear what they will discuss. I am particularly interested in the questions our students and campus community will have for them."