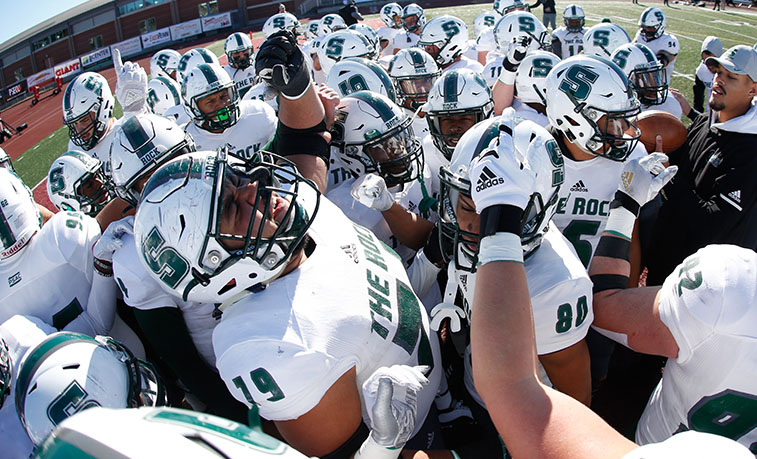 INDIANAPOLIS - The Slippery Rock University football team was awarded the No. 1 seed in Super Region One for the upcoming NCAA Division II football playoffs during a live selection show announcement from the national committee Sunday evening. With the No. 1 seed in the region Slippery Rock earns a first round bye in the 28-team playoffs and will host a second round game Nov. 30 against the winner of the No. 4-5 matchup between Indiana (Pa.) and Shepherd. That game will be played Nov. 23 at Indiana.

Slippery Rock qualifies for the NCAA Division II playoffs for the second straight year, the fifth time in the last seven years and the eighth time since 1997. The Rock reached the quarterfinals last fall and also in 2015 in their two most recent trips to the playoffs, losing on the road at the No. 1 seed in each of those trips. SRU is 7-7 all-time in Division II playoff games and has reached as far as the semifinals (1998), but has never played for a national championship.

The Rock earned the No. 1 seed after being the only team in the region to post an undefeated record through the regular season. SRU locked that up Saturday with a 37-35 comeback win on the road at Kutztown in the PSAC Championship game. SRU finished the year with wins over two of the top four teams in the region as No. 2 Kutztown and No. 4 Indiana both finished with 10-1 records with their only losses coming against The Rock. SRU also posted wins over 8-3 Wayne State and 7-4 Cal U to finish with four wins against teams with seven or more victories.

Tickets will be available at the gate on the day of each playoff game. Tickets can also be purchased in advance by calling the athletic office at 724.738.4117 or stopping by the office in Morrow Field House between 10 a.m. and 4 p.m. Monday through Friday. Ticket pricing for all playoff games is mandated by the NCAA and is listed below.

Rock Athletic Club members that had access to the President's Tent throughout the regular season will need to purchase additional passes for each playoff game. Tickets for the tent are $55 per game for one or $50 per ticket if more than one ticket are purchased. Members may only purchase up to the amount of tickets available to them during the regular season (if you had two tent passes this year, you can only buy two tent tickets for the playoff games). Tickets for the President's Tent must be purchased in advance and will be available beginning Monday morning at 10 a.m. Tickets can be purchased by calling Erin Bryer at 724.738.4611.