SRU Theatre Department closes out the fall semester with ‘Dogfight’ 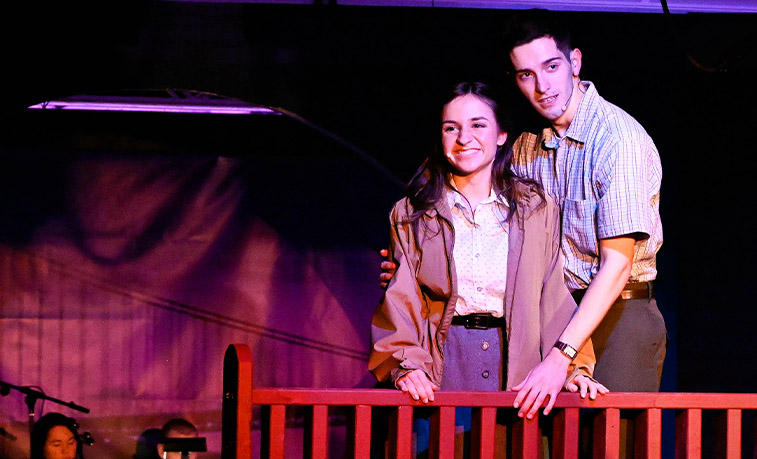 SLIPPERY ROCK, Pa. — Slippery Rock University Theatre will be stepping back in time, to the early '60s specifically, with its final fall semester production of "Dogfight." Performances are at 7:30 p.m., Nov. 20-23 and 2 p.m., Nov. 24. All performances are in the University Union Multipurpose Room.

Directed by Jonathan Flom, SRU assistant professor of theatre, the musical that takes place on Nov. 21, 1963, as a group of young marines is gathered in San Francisco the night before they ship off to Vietnam. They decide to celebrate their last night of freedom with a cruel game they call a "dogfight" where every man sets out to find the ugliest girl he can and bring her to a party. Everyone puts in money and the man with the ugliest date wins the pot. One of the young men taking part is Eddie Birdlace, who is running out of time to find a date when he meets idealistic waitress Rose Fenny in a diner. He invites her to the party, her very first party, and she accepts. She leaves angrily when she finds out about the bet and Eddie, feeling bad, comes to find her. After an inauspicious beginning, an awkward love story begins to unfold.

The musical is an adaptation of the 1991 film of the same name by Nancy Savoca, an American film director, producer and screenwriter from a book by Peter Duchan.

The production features music by Benj Pasek and Justin Paul, an American songwriting and composing duo dedicated to musical theater, film and television, best known for works including "La La Land," "Dear Evan Hansen" and "A Christmas Story." The SRU adaptation will also feature the choreography of Teena Custer, an urban dance theater artist based in Pittsburgh and London, Ontario.

"When I first read the play, I thought about what a challenging production it is, especially as neither men or women are painted in a good light," said Flom.

"There is a lot of really powerful issues involved and these dogfights weren't fictional. Many enlisted men actually got involved in them before shipping out. Being able to objectify someone and not care about them as humans, they were thinking they could sort of condition or harden themselves for what they were about to do.

"There are going to be a lot of feelings for audience members," continued Flom. "I think there are going to be some audience members who are angry, who feel as though the military is being portrayed in a harsh way. Then there will be people who are feminists who feel as though women are being objectified. I think all of those feelings are valid, but I think our goal is to have people walk away with that sense of empathy, that understanding that people sometimes make really bad choices and that we can either shun and judge them or we can try and help change them.

"I think the beauty of this play is that our character, Rose, despite all the hurt she experiences, is more concerned with how men are treating women overall and is determined to make a positive change to that dynamic."

Tickets are $15 for general admission and $12 for SRU students. A "Community Night" admission of $12 for all attendees is scheduled for the Nov. 23 performance.