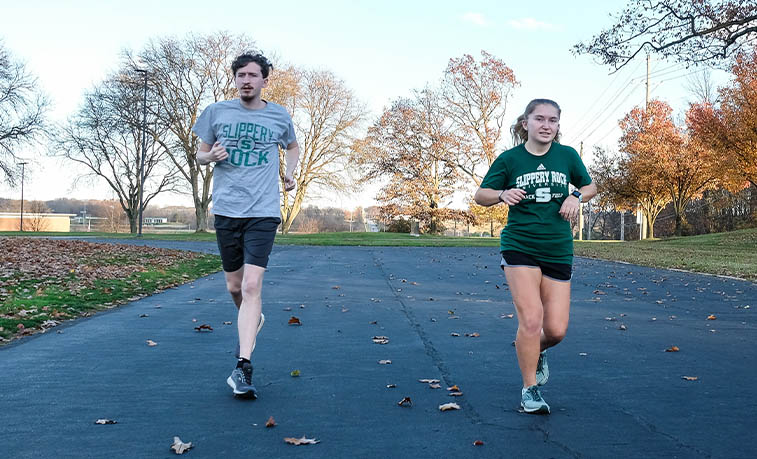 SLIPPERY ROCK, Pa. — The afternoon of Tuesday, Oct. 20, may have been cloudy, but for Ryan Campbell there was a definite bright spot as he posted his fastest one-mile time at Slippery Rock University's Old Thompson Field. The 7-minute, 15-second time trial was symbolic of his time as a student enrolled in SRU's Rock Life program, a post-secondary education program for students with intellectual and developmental disabilities.

Campbell, who has autism spectrum disorder, ran the first three of his four laps around the track with his mentor/coach/training partner Katie Proffitt, a doctoral student majoring in physical therapy from Spring City. Then, the Slippery Rock native ran the last 400 meters on his own, breaking his personal record by 45 seconds, as friends and family members cheered him on, either socially distanced at trackside or watching on Zoom.

"It was awesome to see how much he could improve his time," Proffitt said. "I'm always proud of him by the way he practices and gives 100% but it was exciting to see how fast he could go and for him to do it with his family cheering him along."

Campbell, 23, has been running competitively since he was in the seventh grade, and in more recent years he's competed for Special Olympics of Butler County, including the Fall Sectional hosted by SRU. He won the 5,000- and 1,500-meter runs in his category last year and advanced to the Fall Festival at Villanova University where he took second in the 5,000 and third in the 3,000. But when the COVID-19 pandemic prevented any competitions for the 2020 season, Campbell was left without races for which to train.

That's where Proffitt came in. She had been volunteering as Campbell's mentor since July 2019, but in June she devised a training regimen and the two have been running together ever since, two days per week, at Old Thompson Field.

"She's great," Campbell said. "She really pushes me and I feel good whenever I run." 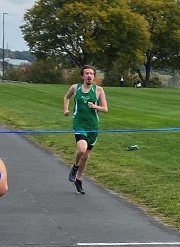 Ryan Campbell breaks the
finish-line tape after
running the mile in a
personal-best 7:15 at an
Oct. 20 time trial at SRU.

It's not that Campbell needed the motivation, but having a goal, even without Special Olympics races, helped him succeed.

"Motivation is not an issue with Ryan, but I wanted him to have something to work toward and to feel like he wasn't just running to run," Proffitt said. "I wanted to provide him that opportunity to see where his training was going and see that he's gotten into great shape and say, 'I was able to do this.'"

Proffitt ran track and field and cross country as an SRU undergraduate before earning her bachelor's degree in exercise science last spring. All Rock Life students are paired with an SRU student mentor and Proffitt, who minored in adapted physical activity, was an easy match with her running background and having previously worked with a family member with cerebral palsy in adaptive sports.

"This was my first coaching opportunity so it's really been a learning process for both of us to work together and figuring out how I can be the best coach for him," Proffitt said. "I've really enjoyed learning and getting to know Ryan and helping him succeed."

Campbell is one of 15 students currently enrolled in the Rock Life program. The students take college classes without earning credit, but they can still experience college life at a less rigorous pace as a path to competitive employment and lifelong wellness. SRU is a member of the Pennsylvania Inclusive Higher Education Consortium, a group funded by the U.S. Department of Education through the acquisition of a Transition and Postsecondary Programs for Students with Intellectual Disabilities grant.

The SRU campus community, faculty, staff and coaches help to support each Rock Life student as they are provided college experiences. There are four pillars of the program: academics, vocational, physical activity and social.

"The physical activity component is a great way for students to meet people and Katie and Ryan working together is a great example," said Wendy Fagan, instructor of physical and health education and Rock Life program director. "It's just like any other college student who tends to do better when they have a buddy to work out with."

Campbell, who is taking two classes this semester, is in his fourth year of the Rock Life program but students were granted an extra year because of virtual classes resulting from COVID-19 safety measures. During his time in the program, Campbell has transitioned from living with his family to living independently in an apartment.

Campbell's grandmother is Kathleen Strickland, an SRU professor emerita and former dean of the College of Education before retiring in 2012. She's noticed how well Campbell has transformed the last four years.

"As any typical college student, Ryan has grown and matured tremendously over the years he's been on campus," Strickland said. "He's more self-assured, he's more independent and he's looking forward to becoming an employed member of the community, the same as any college student. We're just thrilled. Ryan would not have had these opportunities without Rock Life."

Strickland was among those cheering Campbell on that day in October, holding up homemade signs for encouragement during his time trial. Proffitt set up a large digital timing clock that is used for SRU cross country races and draped an American flag around Campbell after he achieved his personal record, just as so many U.S. Olympic runners have done.

"It was thrilling for him and thrilling for those in attendance," Strickland said. "We did it in a way that was safe for everyone and in a way in which we could still celebrate his accomplishments. It's just wonderful to see him keep pursuing his goals and running."

For more information about the Rock Life program, visit the program's webpage.