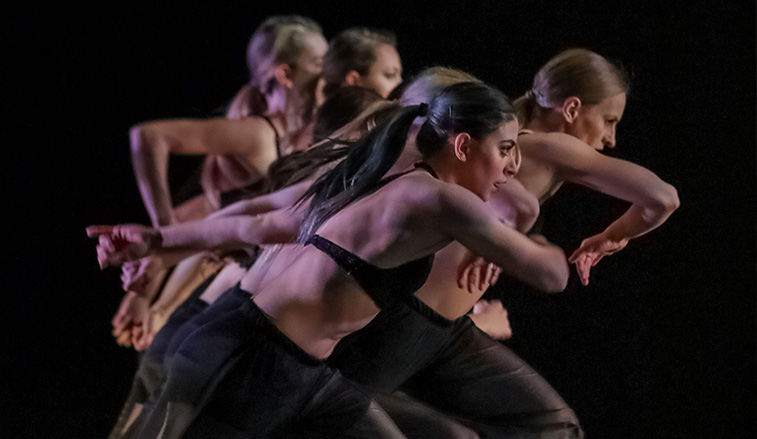 SLIPPERY ROCK, Pa. - As many Slippery Rock University students begin to hunker down in Bailey Library and other campus locations for final exam study sessions, a small cross section can be found in various gyms and studios preparing to showcase what they've learned on the floor. The dance floor, that is.

Under the direction of Ursula Payne, professor of dance and chair of SRU's Dance Department; Jennifer Keller, professor of dance; and with the aid of student directors Natalie Goforth, a senior dual major in early childhood education and dance from Avon, Ohio, and Caroline Ready, a senior dance major from Allison Park, select dance majors and minors will perform original dances at the Dec. 8-9 Fall Dance Concerts in Swope Music Hall. There will be two performances each day, at 2 p.m. and 5 p.m.

Performers for the show were selected based on auditions. Those auditioning had to be a junior or senior and who had choreographed their own dances based on their own experiences and knowledge of dance.

"During auditions, we saw 60 dances performed at the adjudication concert, where students performed their dances before a panel of professors and those that made a certain benchmark were accepted," said Keller. "The number of participants during the audition process is just one great indication of the creativity that is going on in our department."

A total of 26 pieces will be presented, 13 each day, providing audiences with a completely different show each day. Dances will include solos, duets and group dances and feature modern, jazz, hip-hop and other forms of dance.

"We really pride ourselves on the diversity of the aesthetics that are presented," Keller said.

One performance, a duet performed by Alanna Rygelski, a sophomore dual major in dance and communications from Glenshaw and Shannon O'Reilley, a senior dance major from Hanover, features the concepts of the Gaga technique, a movement language developed by Ohad Narahrin, a contemporary choreographer and former artistic director for the Batsheva Dance Company from 1990 to 2017. The critically acclaimed BDC is is popularly embraced as one of the foremost contemporary dance companies in the world.

"In my duet I focused on the constant movement research," said Ready. "I wanted (the dancers) to find something new in their performance with each run of the piece. I also focused on complimentary movement. The only time I wanted my dancers doing the exact same movement was during floor work sections. This meant that while they were moving through the space they never had the same movement happening at the same time, but the movements they were performing were inspired by what the other dancers were doing."

The concert will also include a performance by Jaya Mani's World Dance Class. Mani, an SRU professor of dance, will have her group perform a classical Indian dance, or "Bharatha Natyam," the most popular classical dance form of South India.

Bharatha Natyam originated from ancient Hindu temples. The beauty and grandeur of the art is demonstrated by the dancer using repetitive metrical and intricate footwork; facial expressions to translate music; and vivid hand gestures. This portrayal of music in visual form facilitates sharing rhythm, melody, mood and movement with the audience, ultimately seeking union with God.

A 16-minute dance film titled "Where Love Leads," choreographed by guest artist Marta Renzi, an award-winning dancer and film maker, will also be shown. The film features a pair of SRU dance faculty members, 11 SRU dance students and was shot on location in and around Slippery Rock. "The style (of dance) showcased in the film is contemporary, integrated with real-life, pedestrian movement to give it a strong feeling of community," said Keller.