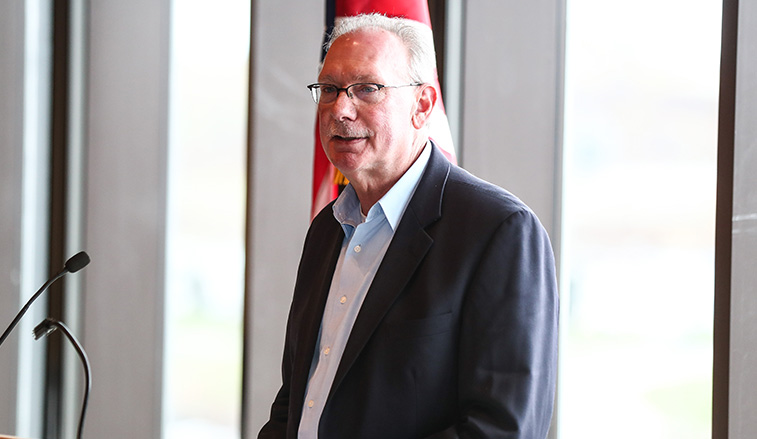 Robert Arnhold, Slippery Rock University professor of physical and health education, was recognized at a lunch hosted by SRU’s Office of Grants, Research and Sponsored Programs, for writing grants that led to more than $5 million of external funding during his career. Arnhold will be retiring in January after 32 years at SRU.

SLIPPERY ROCK, Pa. - Each year Slippery Rock University's Office of Grants, Research and Sponsored Programs honors faculty and staff who write grants to fund research and programs from external sources. An event, Dec. 4 at the Smith Student Center, included special recognition for Robert Arnhold, professor of physical and health education and one of the University's most prolific grant writers. Arnhold will be retiring in January after 32 years at SRU.

While Arnhold's first grant was a modest one, $100 in 1988, the final 17 years of his tenure at SRU saw him receive 77 grant award notices totaling more than $5.7 million.

"That's a phenomenal figure and it's a way to measure Dr. Arnhold's amazing work," said Philip Way, provost and vice president for academic and student affairs, who presented Arnhold with a plaque for his achievement. "However, the impact of scholarships, the benefits to the community and the transformational experiences for our students can't be quantified."

As coordinator of SRU's adapted physical activity program, Arnhold was able to fund as many as nine scholarships per year from the U.S. Department of Education for APA graduate students. Additionally, he wrote several grants that fund transitional services for people with disabilities, including $1.3 million from the Pennsylvania Office of Vocational Rehabilitation, which funds a program that provides job training, education, health and life-skills training to local high school students with intellectual disabilities.

"I didn't expect or need this (plaque), but I'm thankful for the recognition," said Arnhold, who thanked Nancy Cruikshank, director of SRU grants office, for her partnership and encouragement to pursue grants, even smaller awards as he was first getting started. "If you're persistent and you do a good job with other people's money, people respect that and it leads to more, larger grants. It's a snowballing effect."

During the past year, SRU faculty and staff submitted 59 grant requests with 31 award notices being received that totaled more than $1.6 million.