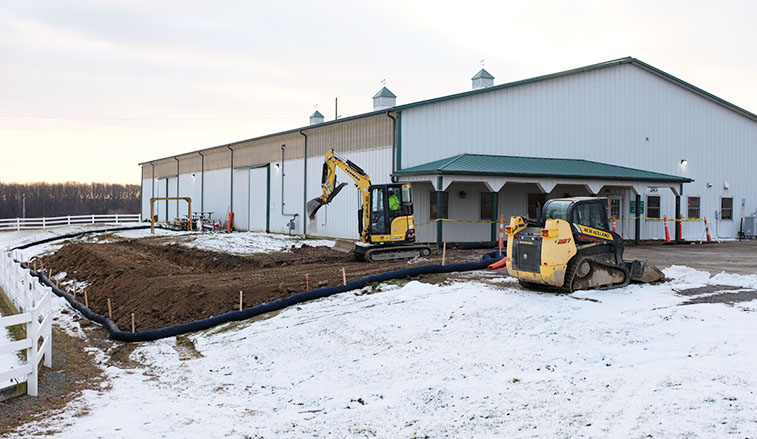 Construction began earlier this week at the Storm Harbor Equestrian Center at Slippery Rock University. A $900,000 project will expand the facility to more than 23,700 square feet.

SLIPPERY ROCK, Pa. - Hold your horses everyone, Storm Harbor Equestrian Center at Slippery Rock University is about to have more space for foot traffic, and, of course, hoof traffic. The largest construction project in the center's 14-year history started this week and will expand the facility by more than half its existing size.

"With our programming and the amount of people in the building, we are busting at the seams," said Courtney Gramlich, who has served as manager of Storm Harbor since 2006. "In the last two or three years we've noticed that the need for programming has increased. We've been able to secure more grant funding to add additional activities and more people are realizing that the facility is here, all of which has resulted in more traffic and our need for additional space."

The expansion will increase the facility to more than 23,700 square feet, extending the indoor riding arena by nearly 5,000 square feet to 80-by-190 feet. There will also be six additional horse stalls, raising the total to 18; a completely new viewing area, in addition to the current classroom with windows facing the arena; and a new corridor, covered porch, storage space and two additional restrooms.

Storm Harbor hosts about 120 riding lessons per week and overall clients can exceed 250 each week. Gramlich said the expansion will allow more opportunities for concurrent programs and larger groups, especially school field trips which she previously had to limit to 20-30 students at a time.

"We're extremely excited," said Gramlich, who indicated that the construction, which is expected to be completed by April 30, should have minimal disruption to daily activity due to most of the work taking place in the morning. The majority of the center's client-based activity occurs in the afternoon and evening. "It's been a couple years in the works to get it all going, and now that construction is starting, it's a thrill."

Funding for the project came from by two separate leadership gifts totaling $900,000 from Gary and Anita Rathburn and Paul and Carolyn Rizza.

"It's hard to describe how meaningful their support is," said Gramlich. "Without it, we wouldn't be able to increase programming and do the things that we're ramping up to do. We would simply remain stagnant. We'd still be serving people but it's nice to be able to address more of the community's needs through the generosity they are providing."