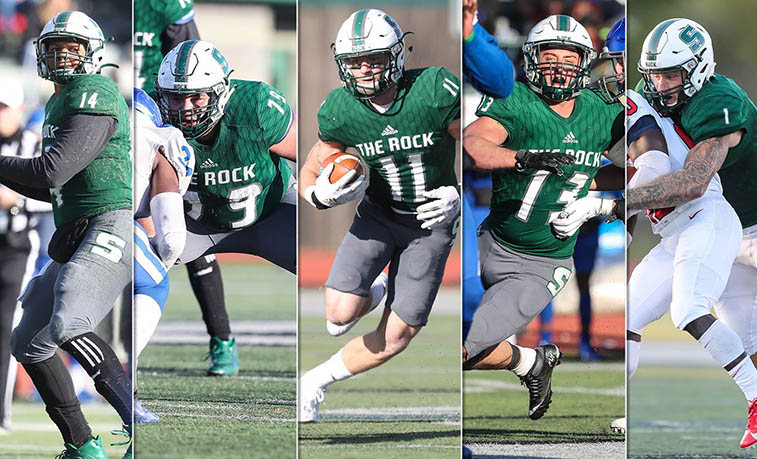 Rivers and Larsen were joined by second team selections Henry Litwin, Chad Kuhn and Brad Zaffram to give SRU its highest total of AP All-Americans in a single year in program history.

The five selections for SRU marked the most of all programs in Division II this year. Tarleton State finished with four AP All-America selections, while Minnesota State, Central Missouri and Ferris State all had three honorees.

"I'm so proud of these guys and happy they are getting recognized nationally for what they bring to our program," said Shawn Lutz, SRU head football coach. "If you want to know what our program is all about just look at these five guys right here and their stories about how they got here. It takes an incredible work-ethic to become an All-American and there aren't five other men in the country that have worked harder than this group."

Rivers fought off a torn labrum in his throwing shoulder that required surgery and forced him to miss the entire 2017 season before transferring to SRU, where he went on to lead the team to a 23-3 record as the starting quarterback. Larsen started 44 games on the offensive line over his career, but was overshadowed for the first three seasons by other All-Americans on the line, never even earning All-Conference honors before this fall. Litwin walked on at SRU, redshirted as a freshman and then caught no passes while playing mostly special teams during his redshirt freshman season in 2017. Since then, he has caught 154 passes for 2,350 yards and 29 touchdowns the last two years. Kuhn never played a snap on the defensive side of the ball before arriving at SRU. He was a quarterback in high school, but embraced the challenge when the SRU staff asked if he would try to learn the defensive end position. Zaffram was a junior college All-American at Lackawanna that was overlooked at the Division I level before finding a home at SRU, where he racked up more than 30 tackles for loss in two seasons.

A brief look at the season highlights for each of The Rock's five All-Americans:

• Roland Rivers III (1st team QB): The AP All-America honor is the latest in what is expected to grow to be a lengthy list of postseason accomplishments for The Rock's quarterback. Rivers has already been named the Super Region One Offensive Player of the Year, the PSAC West Athlete of the Year and is expected to be among the frontrunners for the Harlon Hill Award, presented to the Division II Player of the Year. He is one of the eight finalists for the Harlon Hill and will find out Dec. 20 if he is the first SRU player to ever take home the trophy. Rivers set SRU single-season records for completions (322), passing yards (4,460), passing touchdowns (52) and total offense (5,160). He also set or tied NCAA Division II single-season records for touchdowns responsible for (61), points responsible for (370) and most games with at least three touchdown passes (11). Rivers ranked first in the nation in passing yards (4,460), passing touchdowns (52), total offense (5,160) and points responsible for (370). He completed 322-of-481 passes for 4,460 yards with 52 touchdowns and just seven interceptions, while also rushing for 700 yards and nine touchdowns. Rivers shattered the SRU career record for touchdown passes, throwing 80 in just 26 games over two seasons at The Rock. His 99 career TD passes at the DII level are 25 more than any other active player in DII at the end of 2019. He finished the season with nine games of at least 300 passing yards and threw for 1,051 yards with 12 touchdowns and just one interception in three NCAA playoff games.

• Chris Larsen (1st team OL): Larsen continues to add postseason honors this fall after previously being named to first team All-PSAC and Super Region One honors and being named as one of the eight national finalists for the Gene Upshaw Division II Lineman of the Year. The Rock's starting left tackle finished fourth in the national voting for the Upshaw Award and was the second highest vote-getter among all offensive linemen in the nation. He picks up his first career All-America honor after starting all 14 games for SRU this season and helping The Rock to boast one of the best offensive units in the country. Larsen started 44 career games, including 29 straight to end his career. The Rock's offense ranks first in the nation in passing efficiency (176.9) and first downs (356), third in scoring (46.2 points per game), fifth in passing (329.9 yards per game) and completion percentage (66.7), seventh in fourth down conversions (696 percent), eighth in red zone scoring (91.7 percent) and ninth in total offense (501.7 yards per game).

• Henry Litwin (2nd team WR): Litwin earns his first career All-America honor after posting the best statistical season in SRU history for a receiver. He broke The Rock's single-season records for receptions (103), receiving yards (1,509) and receiving touchdowns (21) while also breaking the SRU career record for touchdown catches (29) with all 29 coming in the last two seasons. His 1,509 receiving yards are the sixth most by any player in a single-season in PSAC history. What's even more impressive about Litwin's numbers, is that he put them up while sharing the ball with Jermain Wynn, Jr. who caught 95 passes for 1,339 yards and 15 touchdowns. That duo are the only pair of receivers from any level of college football to go over 1,300 yards this season. Litwin ranks second in the nation in receiving yards and touchdowns this season and ranks sixth nationally in total points scored (126).

• Chad Kuhn (2nd team DL): Kuhn earns his first career All-America honor after a breakout junior season in which he led the PSAC and ranked ninth in the nation in total sacks with 11.5. He recorded 2 more sacks than any other player in the PSAC during the regular season and also finished the year with 17 total tackles for loss. Kuhn ranked fifth overall on the SRU defense with 58 total tackles while also forcing two fumbles and being credited with a team-high 11 QB hurries. His 11.5 sacks are the sixth most in a single-season in SRU program history and his 20 career sacks rank 10th all-time at The Rock.

• Brad Zaffram (2nd team LB): Zaffram earns his first Division II All-America honor after leading The Rock defense in a number of categories this season. He ranked first on the team in total tackles (93), solo tackles (61) and tackles for loss (19.5). He led all players in the PSAC in tackles for loss during the regular season and his 19.5 tackles for loss are the most among all linebackers in Division II this season. His 19.5 TFL are also the sixth most in a single-season in SRU program history. Zaffram had 25 more tackles than any other Rock defensive player and 14 more solo stops than any other SRU player in 2019. In addition to his tackle numbers, Zaffram also recorded two interceptions, three forced fumbles, two fumble recoveries, one blocked kick and nine additional credited QB hurries.