Rivers ran away from the field in the voting, racking up the fourth-highest total of first place votes in the history of the award and the most first place votes by any winner since 2008. He received 54 first place votes from the 96 ballots that were cast by Division II sports information directors, finishing with 199 total points and topping the runner-up, Jaleel McLaughlin from Notre Dame (Ohio), by 57 points. Tarleton State receiver Zimari Manning earned 93 points to finish third in the voting.

"This is a dream come true for me," said Rivers. "I want thank Slippery Rock University, specifically the coaches and my teammates, for giving me the opportunity to achieve this dream. This team and this program are so special. Coming here was one of the best decisions of my life. I'm so thankful to be a part of this Rock family. I also want to thank the voters for casting their votes for me and the Little Rock Touchdown Club and the GAC for putting this together. I'm looking forward to coming down to accept the award next month."

The Harlon Hill Trophy puts a cap on a thrilling week for Rivers, who was also named the Division II Conference Commissioner's Association National Offensive Player of the Year and a first team All-American by the D2CCA and the Associated Press earlier this week. 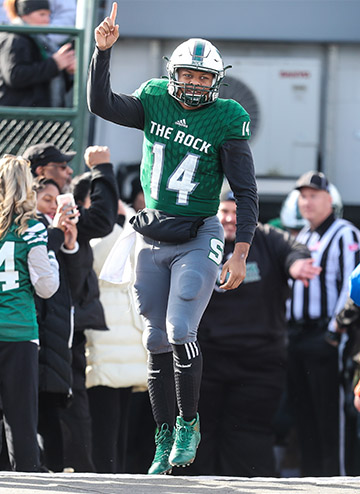 He ranked first in the nation in passing yards (4,460), passing touchdowns (52), total offense (5,160) and points responsible for (370) and finished the year completing 322-of-481 passes for 4,460 yards with 52 touchdowns and just seven interceptions, while also rushing for 700 yards and nine touchdowns. Rivers shattered the SRU career record for touchdown passes, throwing 80 in just 26 games over two seasons at The Rock. His 99 career TD passes at the DII level are 25 more than any other active player in DII at the end of 2019.

Rivers closed his career by throwing for 1,051 yards with 12 touchdowns and just one interception, while also rushing for three touchdowns, in The Rock's three NCAA playoff games.

In two years as SRU's starting quarterback, Rivers posted a perfect 14-0 record in PSAC Western Division play, went 23-3 overall and led SRU to at least the quarterfinal round of the Division II playoffs in each season.

The Hill Trophy is named for the late Harlon Hill, the former University of North Alabama standout, who excelled at the Division II level from 1950-53 before going on to fame in the National Football League with the Chicago Bears. The award has been presented to the top Division II player in the nation for the last 34 years.