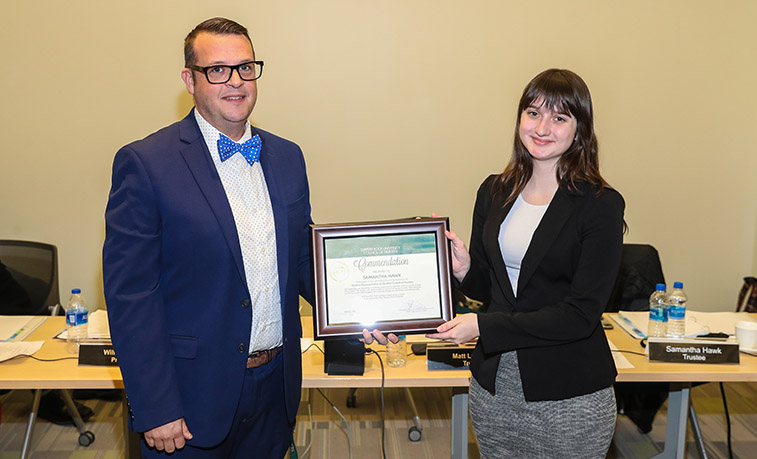 SLIPPERY ROCK, Pa. — Slippery Rock University's council of trustees conducted its quarterly business meeting, March 4, at the Smith Student Center. Executive actions taken at the meeting included a resolution to honor Samantha Hawk, an SRU senior political science major from South Park, with a commendation of service. Hawk has served as a student trustee since June 2020 and her term will end when she graduates this spring.

In addition to serving as a trustee, Hawk has been involved in several leadership positions at SRU. She is the current president of the SRU Honors College and a former national communication coordinator for the Association of Residence Hall Students and former parliamentarian and vice president of operations for the Sigma Sigma Sigma sorority. Hawk plans to pursue a career in state-level politics after she graduates.

"I'm proud of the work we've done at the University," Hawk said. "It's been a great educational experience; I've learned a lot from my fellow trustees, and I've grown a lot from my time as a trustee. I look forward to passing this opportunity to the next student trustee."

SRU is currently conducting a search for Hawk's replacement, as one full-time, undergraduate student at the sophomore level or above is eligible for the one seat on the council designated for a student trustee.

"Samantha has done a great job during the last two years, and we are grateful to have her on the council," said Joshua Young, the trustee who presented Hawk's commendation and himself is a former student trustee having graduated from SRU in 2004. "We appreciate her leadership and the way she fostered communication between and among the trustees and the students. She demonstrated integrity while having to make difficult decisions and we wish her all the best in the future."

Other actions taken by the trustees included a resolution to demolish two caretaker homes at the Old Stone House. The homes, located at 119 and 121 Hallston Road at the Old Stone House property which SRU manages, are in need of major repair and have been deemed no longer useful. The Old Stone House, which origins date back to 1822 and will remain and continue to be managed by SRU, is a historic wayside inn and museum of rural life.

The council also approved the University's capital budget submissions for fiscal year 2022-23. This action is in accordance of board of governors' policy to submit capital facilities planning, programming and funding to Pennsylvania's State System of Higher Education by May 1 for consideration at the BOG's July meeting. Projects submitted for approval include renovations to Morrow Field House, the McKay Education Building and the Eisenberg Classroom Building, with estimated costs totaling $84.5 million, which are proposed to be released during three fiscal years between 2025-28.

The trustees also received the President's Report, reports from each of its standing committees, and reviewed finance and divisional reports. The council also received an introductory presentation from Anthony Jones, chief diversity officer.

Through its standing committee meetings, the trustees received and conducted the following items that did not call for executive action:

The next quarterly business meeting is scheduled from June 2-3 at the Smith Student Center.