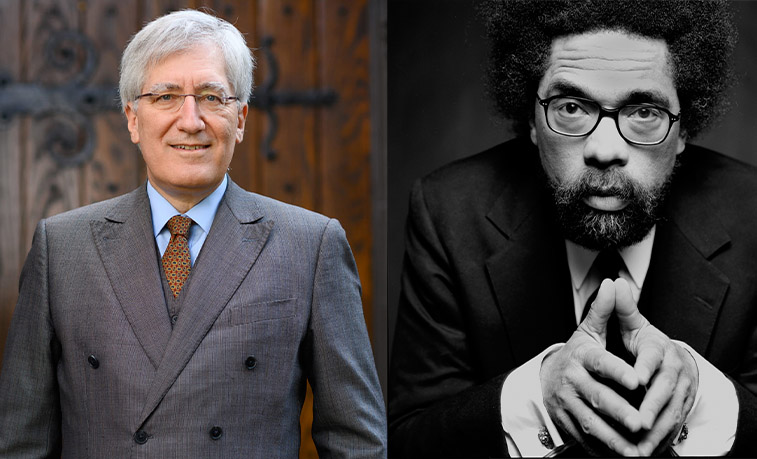 Guest speakers Robert George and Cornel West are coming to Slippery Rock University to share a message of unity to eradicate discrimination and racism, 7 p.m., April 21, at the Miller Theater in the Performing Arts Center.

SLIPPERY ROCK, Pa. — Described by multiple national media outlets as the "ideological odd couple," guest speakers Robert George and Cornel West are coming to Slippery Rock University to share a message of unity to eradicate discrimination and racism. The event, titled "A Civil Discourse," will occur 7 p.m., April 21, at the Miller Theater in the Performing Arts Center. The event is open to SRU students, faculty, staff and other invited guests. Admission is free, but tickets are required for entry, and they can be obtained online at sru.universitytickets.com.

George is known as an influential conservative Christian thinker and author who is an authority on constitutional interpretation, civil liberties, philosophy of law and political philosophy. West has been considered the preeminent African American intellectual of his generation, and is known for his provocative democratic ideology, books that he authored such as "Race Matters" and "Democracy Matters," and his frequent television guest appearances on "The Bill Maher Show," "The Colbert Report," CNN, C-SPAN and "Democracy Now!"

For their event at SRU, George and West will discuss topics that include freedom of speech, freedom of thought, the Black Lives Matter movement and the cancel culture. Anthony Jones, SRU chief diversity officer, will serve as the event's moderator.

"I'm excited about this event because Robert George and Cornel West will be able to speak from two different perspectives," Jones said. "They represent both sides of the political and social spectrum, and I think it will really make for great conversation. These two are good friends despite going back and forth with counterpoints, so this event will show the audience that you can have two different points of view and still come together with mutual respect."

The event will include an hour-long presentation followed by an opportunity for the audience to engage the guest speakers with 30-minute Q&A session and a 30-minute meet and greet.

George is a professor of jurisprudence at Princeton University, where he is the director of the James Madison Program in American Ideals and Institutions. He is also a visiting professor at Harvard Law School where he teaches philosophy of law and related subjects. A graduate of Swarthmore College, George earned master's and doctoral degrees from Harvard University and four degrees from Oxford University. He has served as chair of the U.S. Commission on International Religious Freedom, on the U.S. Commission on Civil Rights and the President's Council on Bioethics, and as the U.S. member of UNESCO's World Commission on the Ethics of Scientific Knowledge and Technology. He is the author and editor of several books, including "Making Men Moral:  Civil Liberties and Public Morality," "In Defense of Natural Law," "The Clash of Orthodoxies" and "Conscience and Its Enemies."

West is a professor at Union Theological Seminary in New York City, and he was previously the professor of the practice of public philosophy at his alma mater, Harvard University. He is also professor emeritus at Princeton University, where he earned his master's and doctoral degrees in philosophy. The author of 20 books and editor of 13 titles, West often speaks to audiences large and small on subjects ranging from racial justice and queer rights to climate justice.

The event will be livestreamed to affiliates of "We Stand Together," a coalition of presidents and chancellors of 14 universities from across the country, for which SRU President William Behre is a member. The coalition's objective is to bring forward a message of unity to eradicate discrimination and racism.

"These are the types of civil conversations that are needed on college campuses, and we're honored to have Dr. George and Dr. West visit SRU to share their views," Behre said. "We encourage the SRU community to attend and engage thoughtfully about these important topics and issues, especially those about race and discrimination, which are so prevalent in how people relate to one another."

For more information about the event, contact SRU's Office of the President at 724.738.2000 or president@sru.edu.