After recognizing a dire need for diapers by local families, a Slippery Rock University student organized a diaper drive through a local pediatrics practice.

SLIPPERY ROCK, Pa. — Most government benefits and safety-net programs don't recognize diapers as a basic need, but a Slippery Rock University student certainly did while working at a local pediatrics practice. She decided to do something about it.

Haley Butrum, a graduate student in the physician assistant studies program from Ocean Pines, Maryland, has organized a diaper drive that in just one week has gathered more than 70 boxes of diapers -- nearly 14,000 diapers -- thanks to public donations at drop-off locations and through financial contributions. The diapers are being donated to families at Next Generation Pediatrics in Butler, where Butrum recently completed her clinical rotation.

"We kept getting babies coming in with diaper rashes, and one of the common problems with diaper rashes is parents not changing their babies as often as they should," Butrum said. "A lot of the reasons why they don't change them often is because they can't afford diapers -- diapers are really expensive."

According to the National Diaper Bank Network, the average baby requires 12 diapers per day, which adds up to a cost around $900 per year, and 1 in 3 American families struggle with diaper needs. Diapers aren't offered to families who qualify for the U.S. Department of Agriculture's Supplemental Nutrition Assistance Program, otherwise known as SNAP, or other government-assistance programs for low-income families, such as Women, Infants, and Children, also known as WIC. 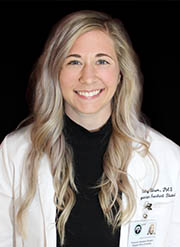 "That doesn't make any sense to me," Butrum said. "Diapers are essential. So, I organized a diaper drive for patients at this practice, at least short-term, to prevent these infections. Also, I'm trying to get the message out to everyone as much as possible that this is a problem, and if we can somehow get some attention on this issue, maybe this can be changed in the future (for more government assistance)."

Butrum created a TikTok video that was also shared on other social media platforms, including the SRU PA program's Facebook page. The video featured Butrum, fellow PA students and nurses and staff from Next Generation Pediatrics displaying facts and messages on sheets of paper about the need for diapers, as well as methods by which people can donate to the diaper drive.

"The response has been incredible," Butrum said. "Once we hit $500, I was just at a loss for words. Everyone has been so giving and it's so great to see. People like me had no idea that this was such a big problem."

"Haley's efforts were astounding by how well she organized (the diaper drive)," said Kelli Sovek, practice manager at Next Generation Pediatrics. "We are in shock by the amount of diapers coming in and the patients are very grateful, especially when it costs almost $40 per box. We also had a lot of fun with the videos and this has been great for the practice to have a closer bond with our patients."

Nurses at Next Generation Pediatrics are distributing the diapers proportionately to all their patients as they come in for their appointments.

Diaper donations will continue to be accepted at SRU's Harrisville Building (weekdays, 8 a.m. to 4:30 p.m.) and Hughes Penn Gold Ice Cream Shop (daily, 10 a.m. to 9:30 p.m.) for the remainder of April, as well as monetary donations through Venmo, @SlipperyRockPAProgram.

For more information about the PA program at SRU, visit the department's webpage, email pa.program@sru.edu or call 724.738.2425.