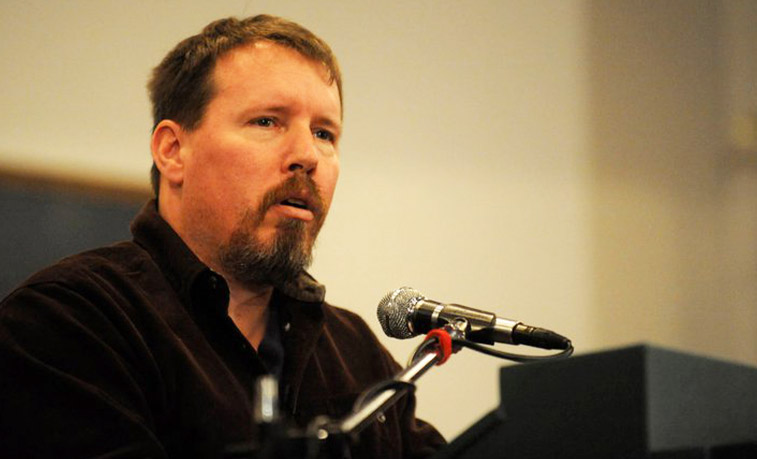 SLIPPPERY ROCK, Pa. — What do more than 1,200 Slippery Rock University students have in common? They were assigned to read books this academic year written by Brian Turner. An author, poet and U.S. Army veteran, Turner is this year's guest speaker for Common Read, a virtual event, 8 p.m., April 22, sponsored by SRU's English Department, College of Liberal Arts, President's Commission for Veterans and Military Affairs and Kaleidoscope Arts Festival.

The event, conducted via Zoom, is free and open to the public with online registration. Turner will read an excerpt of one of his books and give a 20-25 minute formal presentation, followed by a 15-20 minute Q&A session.

Common Read is an annual event organized by the English Department, featuring a presenting author of a book read by students in multiple sections of SRU's Critical Reading class. More than 1,200 students in 35 sections took the class in 2020-21 as part of Rock Integrated Studies, the general education requirement for all academic majors at the Univesity.

"We select authors who speak to topics or current issues going on in the nation or region that might be appealing to students," said Julie Naviaux, assistant professor of English and Common Read program coordinator, who led the committee that selected Turner. "We try to select texts with styles that are approachable to the 18- to 22-year-old demographic and Turner felt like a good fit."

Students read either Turner's memoir, "My Life as a Foreign Country," or his book of poetry, "Here, Bullet." Turner, the Master of Fine Arts program chair at Sierra Nevada University, served seven years in the U.S. Army, including a year as an infantry team leader in Iraq with the 3rd Stryker Brigade Combat Team, 2nd Infantry Division.

"His writing voice is relatable to the way people in the 21st century think about their lives," Naviaux said. "He feels like your friend. War is usually this masculine, aggressive thing, and he maintains that, but his writing is really reflective and emotional. In terms of gender, which is usually about women's issues and femininity, our students said they were interested to read about gender issues about masculinity, how men are portrayed and their relationships with their friends and fathers. Because of this, they really responded well to Turner."

In "My Life as a Foreign Country," Turner retraces his war experience: pre-deployment to combat zone and homecoming to aftermath. According to a book description on Turner's website, "his account combines recollection with the imagination's efforts to make reality comprehensible. Across time, he seeks parallels in the histories of others who have gone to war, especially his taciturn grandfather (World War II), father (Cold War) and uncle (Vietnam). Through it all, Turner paints a devastating portrait of what it means to be a soldier and a human being."

"We hope that this Common Read provides a memorable moment for people, so that when they reflect 10 or 20 years from now about influential books and authors, they'll say, 'That was really cool that I got to see Brian Turner,'" Naviaux said. "His message is powerful and he can be that figure for people, just like Joy Harjo and other authors who (the University has hosted for speaking events)."

Next year, SRU students will be reading "The Secret Lives of Church Ladies," written by Deesha Philyaw.