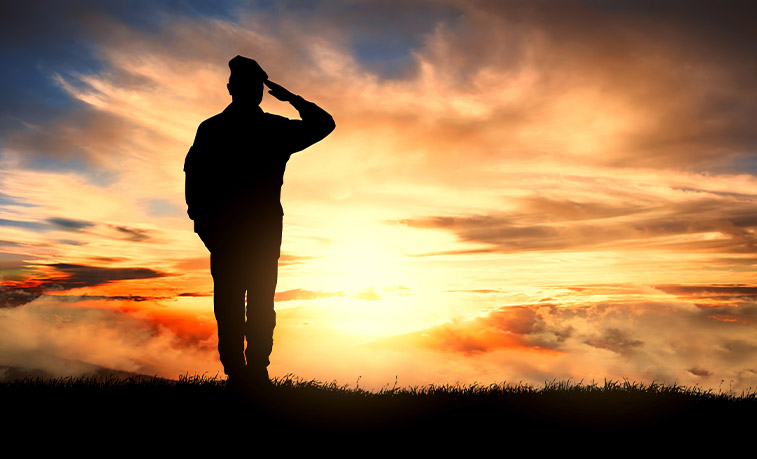 The event comes one week after SRU's battalion conducted its annual spring awards ceremony via Zoom, recognizing cadets and support staff for their dedication to the program with several awards. The commissioning ceremony is considered the culminating event for cadets that brings a mix of emotions.

"Commissioning is a very big deal," said Kurt Bandow, a senior criminology/criminal justice major from York. "It marks the moment in our lives that we enter the Army."

"It's going to be sad to leave the program and SRU behind," said Austin Reep, a senior philosophy major from Butler. "But I'm really happy for all my classmates and I'm excited to see what all my peers do in the future."

There are three components of the ceremony: the cadets are sworn in as officers with an oath of enlistment, they receive their new insignia of rank as second lieutenants and then they accept their first salute from a noncommissioned officer.

For the oath of enlistment, cadets are sworn in by a commissioned officer or warrant officer of their choosing. They can be a family member, such as Reep choosing his uncle, Ret. Col. Cloyd Smith, or a family friend, as Bandow chose Pete Glugla, a chief warrant officer in the National Guard who mentored him and convinced him to join the Army. Some cadets choose members of the cadre at SRU, as Capt. Adam Readout, assistant professor of military science, will read the oath to Jonathan Durban, a senior safety management major from Prospect.

For most cadets, they have family members pin on their bars, indicating their insignia of rank, and that is the case for cadets Reep, Bandow and Durban. The parents of Reep (Dennis and Debra), Bandow (Aaron and Dusty) and Durban (Greg and Beth) will perform the pinning for their sons, while Reep's sister, Abby, and Bandow's sister, Kaylee, will also participate.

Completing the commissioning ceremony will be the first salute, a tradition between a non-commissioned officer who has influenced the newly commissioned officer. The NCO is called to post and salutes the new officer, who returns the gesture and also hands him or her a silver dollar through a handshake of appreciation. Sgt. Jacob Astare, a former SRU student who recently returned from a deployment in Kuwait, will salute both Reep and Durban. Sgt. Mark Jackson will salute Bandow.

"It's an honor to be able to follow after the other great men and women who have done the same thing and I'm really just excited to start my career," Durban said.

"The commissioning ceremony is a culminating event for our cadets and we're honored to be able to send them off to their next stage in life," said Lt. Col. Jennifer Martin, professor of military science and head of SRU's ROTC program. "They are already leaders here at SRU and they're going to be great leaders as Army officers. We wish them well and we are grateful for their contributions to our program."

The branch assignments for each of the cadets were announced in December. Many of the cadets will next attend a Basic Officer Leader Course before being assigned to a unit. For example, only a week after commissioning, Reep will go to Aviation BOLC in Fort Rucker, Alabama. His goal is to someday pilot Blackhawk helicopters.

Other cadets receiving commissions April 30 will be:

The following awards were presented to cadets and staff at the spring awards ceremony, April 23: