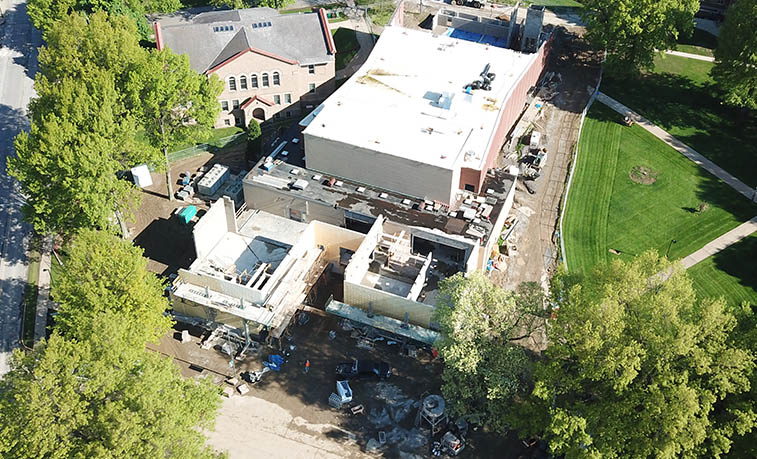 There will be 15 major construction projects taking place at Slippery Rock University this summer, including the continuation of a $29.2-million renovation project to SRU’s Performing Arts Center, which includes Miller Auditorium.

SLIPPERY ROCK, Pa. — Slippery Rock University's spring semester may have concluded last week but construction projects on campus are in full swing and will continue throughout the summer. There will be approximately 15 major construction projects either beginning or continuing this summer, totaling nearly $38 million of improvements to buildings across SRU's 660-acre campus.

"This will be a busy summer with a higher than normal volume of projects," said Scott Albert, assistant vice president for facilities and planning, who oversaw as many as 20 major projects last summer. "Although this summer will not be as busy as last summer, there's still a significant amount of work being done. We're excited to see continued progress with a number of ongoing projects."

The second phase of renovations to two residence facilities, North Hall and ROCK Apartments, will take place this summer. North Hall's second-floor student rooms will be renovated and windows and student doors throughout the building will be replaced. The kitchens and bathrooms in four of the eight ROCK Apartment buildings -- 340, 360, 370 and 380 -- will also be renovated. The other four buildings were renovated in 2018. The ROCK Apartments house a combined 188 students in 47 four-bedroom units.

The Strain Safety Building reopened for classes in February after undergoing a $7.5 million renovation project that began in 2017. However, there will be a few "punch-list items" of work totaling $200,000, including the replacement of mortar joints, that were scheduled for the summer to avoid disturbing classes. Overall improvements and updates to SSB include a new air conditioning system, windows, restrooms, faculty offices, student study spaces, ROTC student lounge, student art gallery, construction/general industry safety labs, improved industrial hygiene and emergency preparedness/fire safety labs and updated classrooms.

The largest expansion project in the 14-year history of the Storm Harbor Equestrian Center will be completed by mid-June. The $1 million project, which started in December, will expand the facility by 23,700 square feet, including a larger indoor riding arena and six additional horse stalls, along with a new viewing area, corridor, covered porch, storage space and restrooms.

Boozel Dining Hall will also undergo a $1 million renovation this summer. The work will focus mostly in the kitchen, but guests will notice several cosmetic changes to the dining area and food stations upon completion, which is scheduled for Aug. 12. Due to the renovation, summer food service will be housed in Weisenfluh Dining Hall.

Work on Old Main's roof will be completed this summer. The $800,000 project that started in October included the replacement of slate shingles with asphalt shingles, gutter repairs and a metal cap on the cupola, all of which met the approval of the Pennsylvania Historical and Museum Commission to best reflect the historic features of the the campus' oldest structure, built in 1893.

Renovations to the performing arts buildings, which started last summer, will continue. Albert estimates the project is currently 60-percent complete. The $29.2-million project includes renovations to West Gym, East Gym and Miller Auditorium, with updated completion dates anticipated for August 2019, December 2019 and February 2020, respectively. Upon completion, Miller Auditorium will be expanded by 9,500 square feet and feature a 753-seat performance space, two dance studios, an orchestra pit, a new lobby and a scene shop. West Gym will house offices and classrooms for SRU's Dance and Theatre Departments and a dance studio with additional support areas for both departments. East Gym updates will include a black box theater with seating for 296, a costume shop, acting and design classrooms and a dance studio.

Albert said there would be other smaller, maintenance-related projects, such as window replacements and renovations to at least four classrooms.

New projects on the horizon include a $19.3 million renovation to the University Union, which is in the design phase; a $1.8 million project to McKay Education Building for restroom renovation and window replacement; and new engineering labs, for which a feasibility study is being conducted to determine their locations.